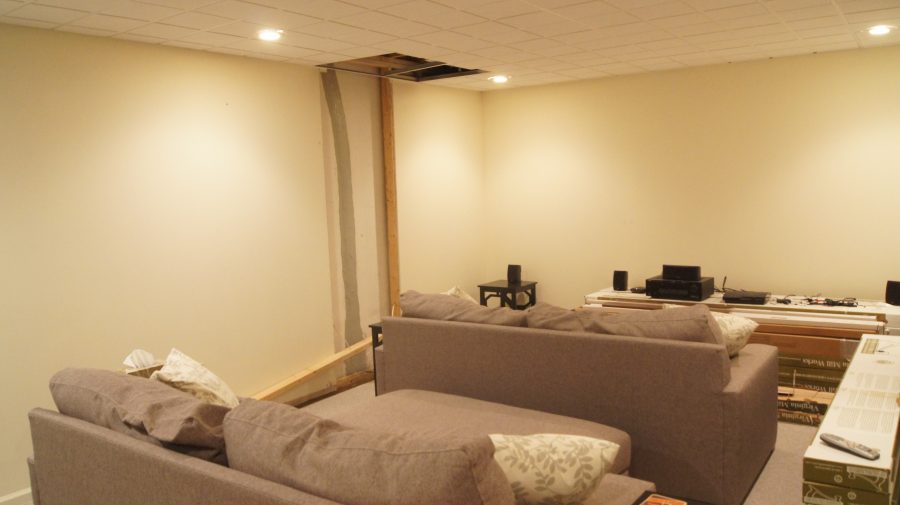 MOLD. In the basement.

We have a pretty large finished basement that serves many purposes… gym, bar, bathroom, storage, workshop, garages, and theater.  The theater and workshop are the most heavily used of the spaces, because projects. And mindless weekend movies after bedtime.

We’ve talked before about how we bought all of the flooring for this house at almost 3 years ago at this point.  About 2500 sq ft of flooring, and only some of it has been installed.  So we still have a lot of flooring boxes laying around the house, hidden under beds, and in the basement.  So we have stacks of boxes around the theater haha.

One day, we were headed downstairs on a weekend to watch a movie after Connor went to bed, and something on the wall near the boxes caught my eye. It was black.  And my stomach immediately turned.

At 30 weeks pregnant, I immediately backed away and pointed it out to David.  We both agreed, it was mold.  It looked like it traveled down under the boxes, in the carpet, too.  And we got discouraged and ignored it for a little while haha.  David got a little motivated to find a band-aid, and found a dehumidifier on Craigslist and went to buy it.  We DIY a lot of stuff, but with both of us having asthma, we really didn’t want to even touch this.

I was in complete denial of this whole situation.  I kept ignoring it.  I HATE when these things pop up; unplanned projects and surprises are my worst nightmare.  I’m a planner.  So I was really no help in this project.  David finally started to contact some waterproofing companies to come in and give us an opinion/recommendations/quotes. And MAN, just like the load bearing wall removal project we did, the contractors thoughts/opinions/quotes were ALL OVER THE PLACE.

Overall, we had 4 contractors come in, and here were their views.  All agreed, that there was probably a crack in the foundation (not uncommon) that was allowing water to leak in down the basement wall, which was causing the moisture and therefore the mold.

Contractor 2: A waterproofing company. The guy who came out was quite a Chatty Cathy.  But, we learned a bit from him about basement moisture and air circulation tools that we should consider for the future.  His base recommendation was to dig out another trench in this part of the basement to allow the water flow from the front wall to the sump pump over in the garage.  This would cost about $3000. He also recommended that we grade the front landscaping away from the house, which was also needed, but not included in his work.

Contractor 4: Another waterproofing company. Clean and trench both directions like the picture above, except to add an additional sump pump in the storage room (see below).  Cost would be $5000.

Contractor 4: A basement waterproofing company. Basically he came and took a look at the wall and poked around.  And he made us feel like idiots.  Plus made all of the other contractors look like idiots.  Because he found that the trench already goes all the way around the house, and there was no need to dig a new one or add in another in the storage room.  He said that we did indeed have a crack, but it really wasn’t that bad (ie, not really that detrimental to the house or having the basement wall cave in or something).  He recommended to give the crack a direct drainage line to the trench, and seal it so that the moisture doesn’t reach the insulation or joists. patching the crack with system they created. Cost would be about $900.

So we finally decided to break it all open and finally take a look since we decided on a contractor (we were kind of reluctant to do this along the way because we weren’t sure what we were going to stir up, and we wanted to use the room in the meantime).  This is what we found.  You can kind of tell that it had been “patched” or filled in before, and it didn’t last.  Nor did they reveal that information to us when they sold us the house. Sigh.

David got in and moved the electrical and stud out of the way (it wasn’t a structural support, it only to hold up the drywall) so that the contractor could come in and do his work.

He moved away all the flooring boxes when he was ready to clean. It cleaned up pretty well with a strong bleach/water solution and a scrub brush (with some breathing protection).

So we didn’t get any pictures of the contractor doing the work, but the system that they used to repair the crack leakage is called FlexiSpan and the information on it can be found HERE. Basically, it acts as a double protection, as it provides a drainage channel down the wall to direct the water down to the trench and therefore the sump pump. And then, that channel is then sealed with a polymer that is flexible to allow for slight foundation movement over time and prevents water escaping.

You can see the result below.

We’ve been letting it air out for about 6 months now, to ensure that it wasn’t going to leak again, and to allow for the wood to dry out. That’s also just because we’re lazy and haven’t felt like finishing the job up yet 😀

We’re really happy with our decision and very happy that we brought in so many contractors to really give us some good recommendations and background on the issue. If we hadn’t brought in so many, we wouldn’t have learned some good tips about air circulation, trench design, necessary natural light needs, and good yard/landscaping grading tips to keep water away from your foundation. We have some work to do in the yard over time, but I think our basement leak is in a good spot now. Eventually, we’ll put the drywall back up and patch it up, but #ain’tnobodygottimeforthat.

One day, we’ll make this theater look amazing. But for now, it’s functional for us to watch movies. And also store hardwood flooring 😀

Why I quit my job to stay home with my family.