This would have been an easier job if I weren’t particular about our flooring.  There I go, making things difficult again. 🙂  The existing wood flooring in the formal living room area was still in pretty good condition, but my need for consistency won over the opportunity of reusing or refinishing.  The carpeted area in the family room was trash from the day we moved in.  It had a huge stain on it in the main walkway from the previous owners, and it was always embarrassing to have someone over and see them look at it. 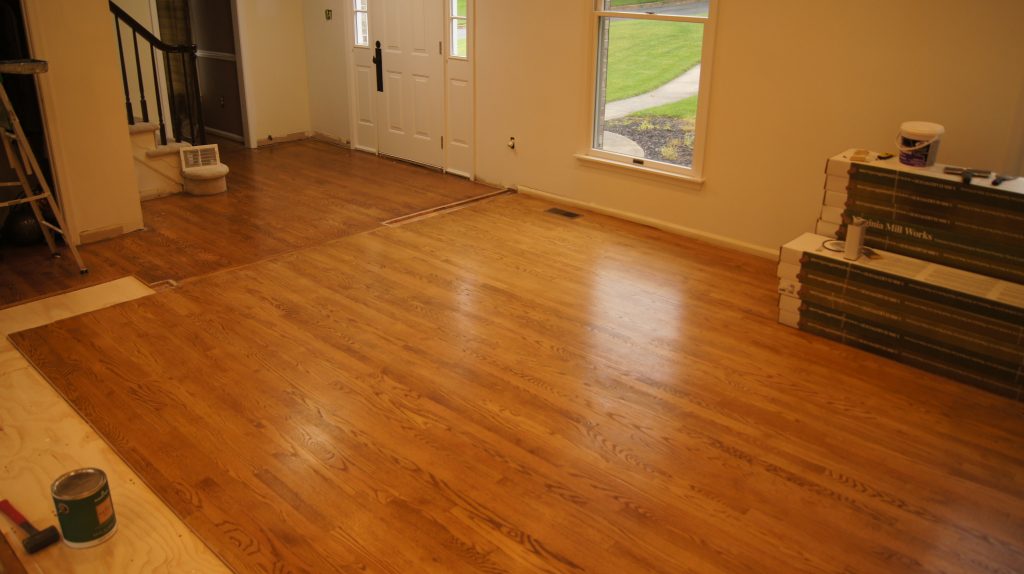 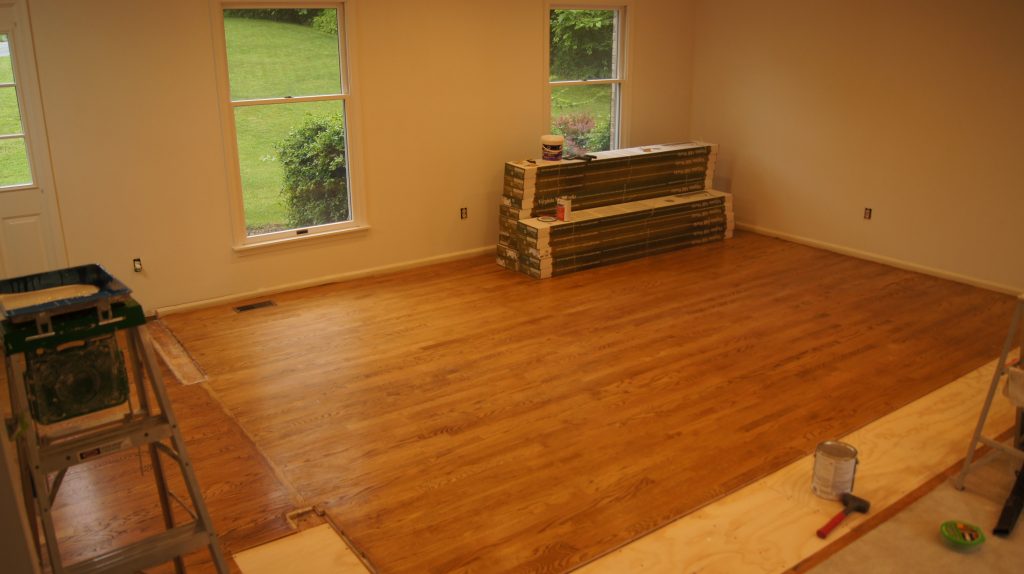 Time to make a dent in getting rid of some of the flooring boxes still laying around!  First things first, we had to get rid of the old flooring.  We took a day off of work and I painted all of the walls, while David worked on the floor.  I’m 100% sure he picked the shorter stick that day.   Watching him rip up every single piece of wood just made my hands and back hurt. 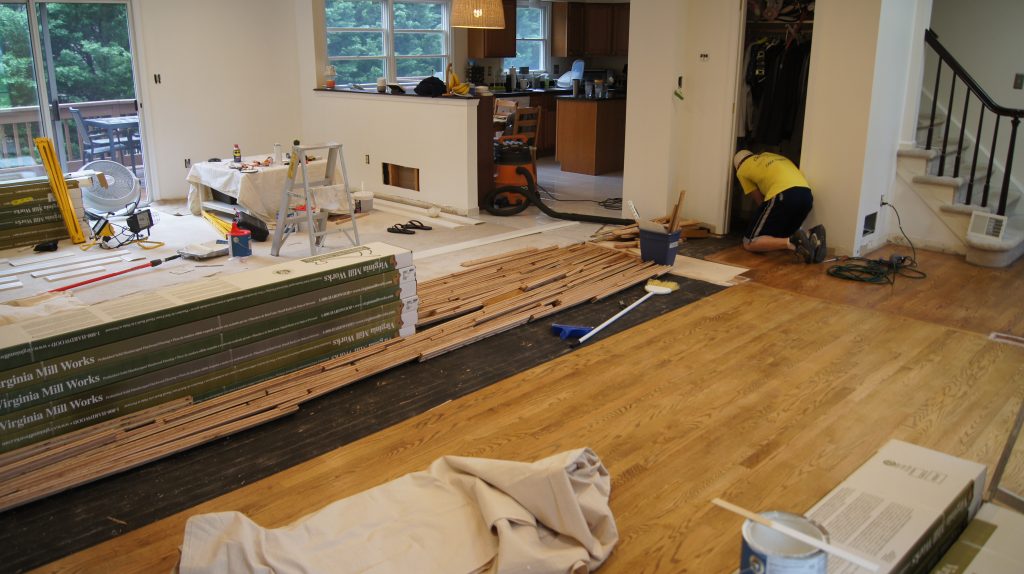 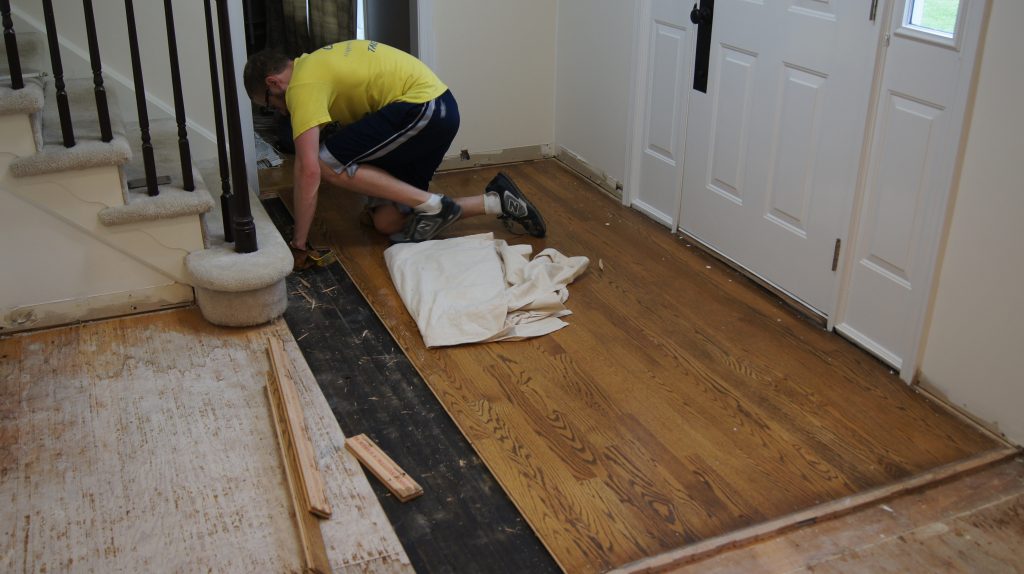 Our plan was to try and sell it since it was still in pretty good shape.  I’m sure a lot of you are like, are you crazy?  Yes, probably, but you know what?  There are crazier people out there than us.  Exhibit A:  The guy who came up from the southern Maryland and paid US $50 to pick through this pile of flooring piece by piece and load it in his own truck.  That flooring still has all of the nails in it too. 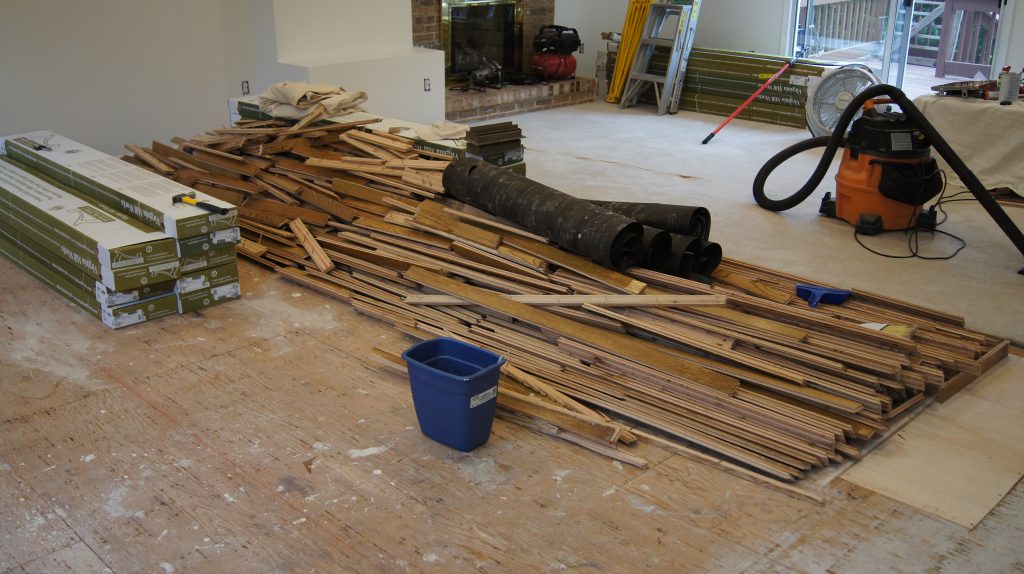 ::shrug:: Money in our pocket, and we didn’t have to worry about moving it out of the house and disposing of it somewhere. Thanks for another win, Craigslist!

I’ll plan one day to get into the details of how we chose our flooring, but for now, I’ll just go through the process of how we installed it:

Easy right?  It’s actually not that bad… installing floors has become a fun job for me… but I probably won’t tell you that the day after I’m done because my back kills me.  Also, David is awesome and he agrees to let me do the fun stuff like the actual nailing down of the floors: 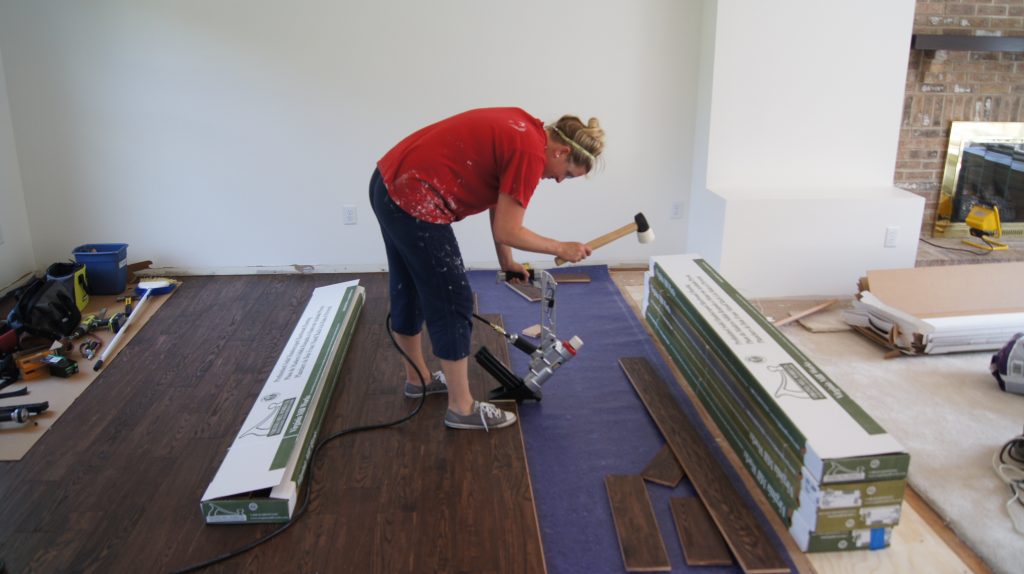 while he does the cuts: 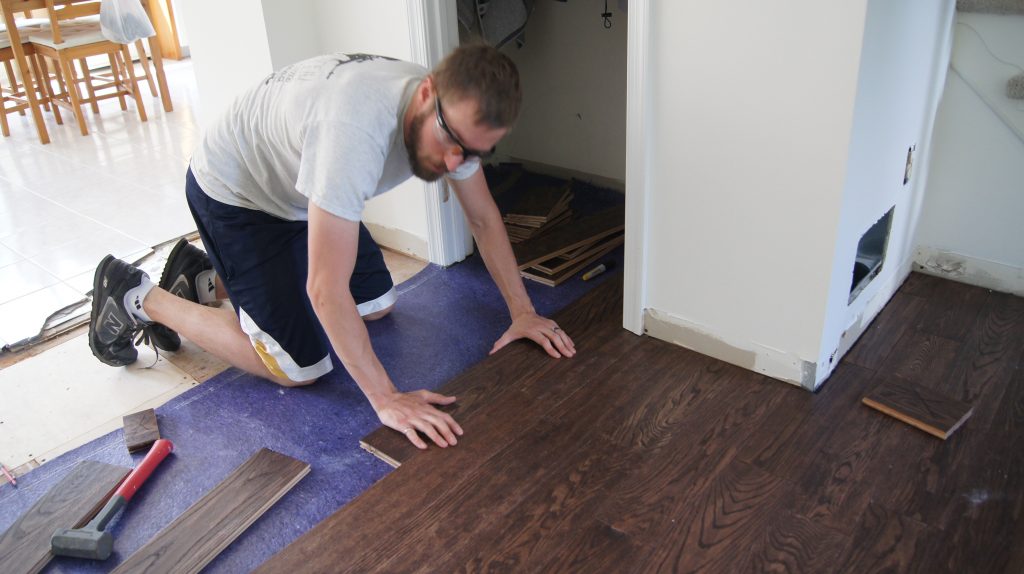 What a good husband 🙂

You’ll notice behind David in the above picture that some of the tile is cracked in the kitchen area.  In a few years, we’re going to redo the kitchen, along with the flooring.  Until then, we needed to make it look a little incorporated while easily being able to work the wood into whatever transition we have in the future.  So, we though it was best to go further with the wood, and just cut back what we would need down the line, rather than add in and piece more wood in somehow.  So David had to remove a big section of tiles: 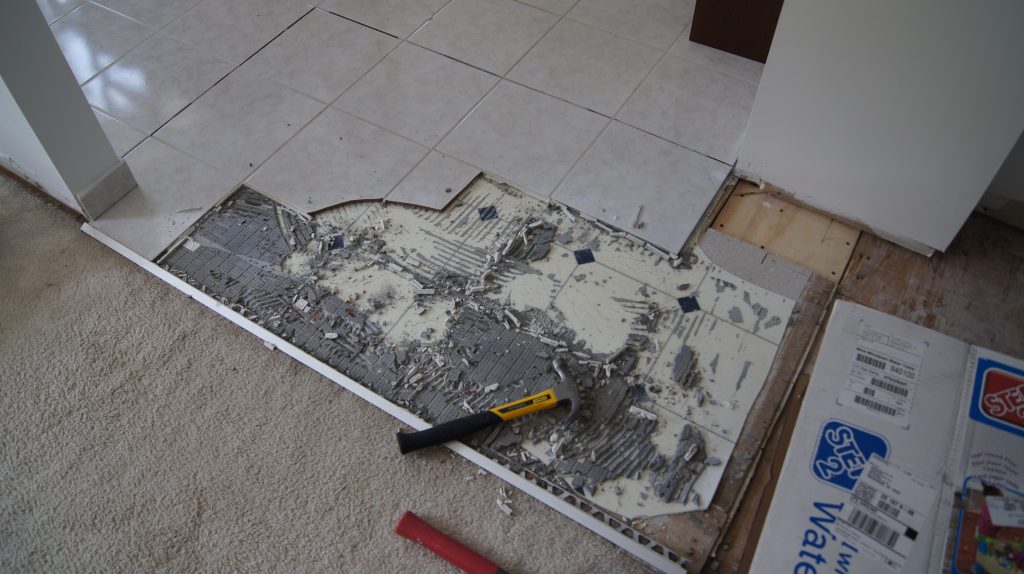 He used his oscillating multi tool with the grout cutter attachment to cut through it: 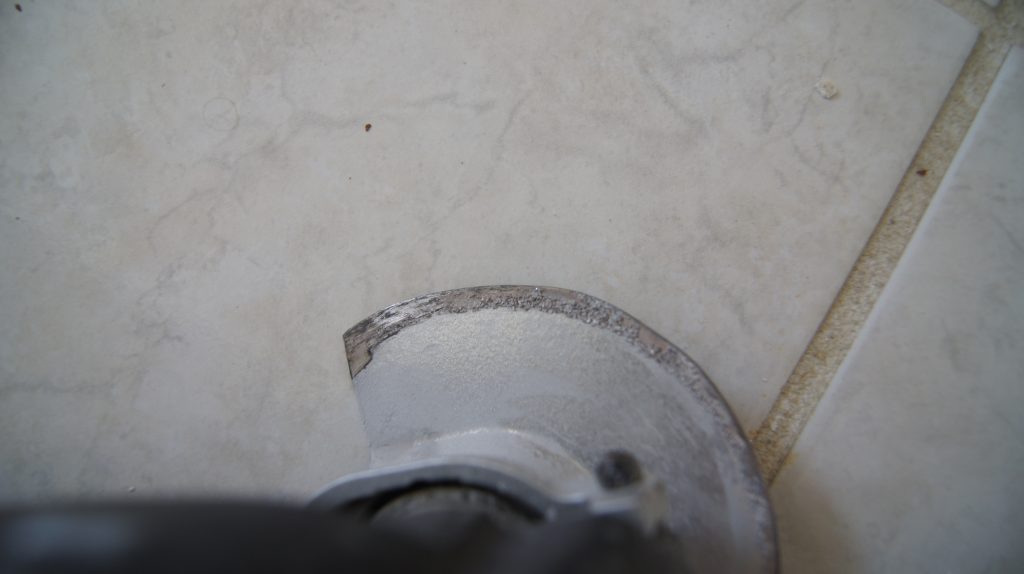 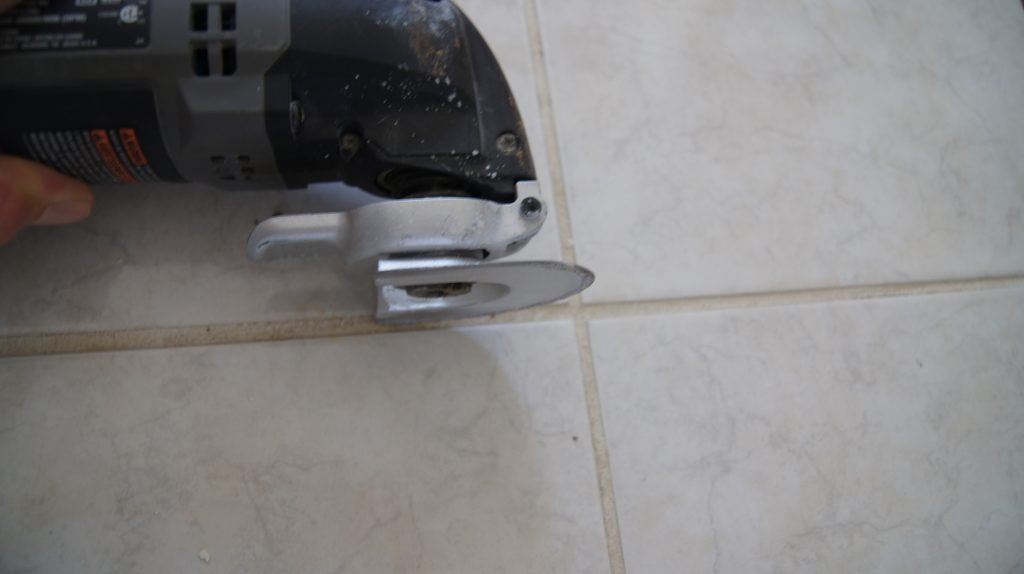 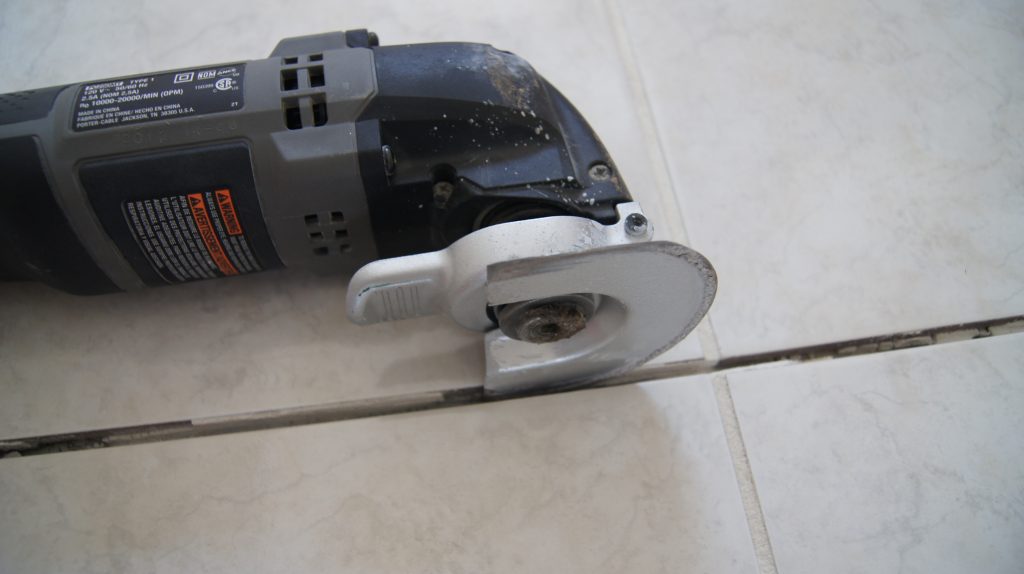 It probably wasn’t necessary, but we didn’t want the tiles that we weren’t removing to break, so best to separate them.

Upon doing this, we discovered that rather than remove the old flooring to lay these tiles, previous owners have just LAID THE NEW FLOORING ON TOP OF THE OLD FLOORING…2 SEPARATE TIMES!  Seriously?  If you’re going to do something like replace a floor, do it right.. don’t be lazy about it.  GRR. 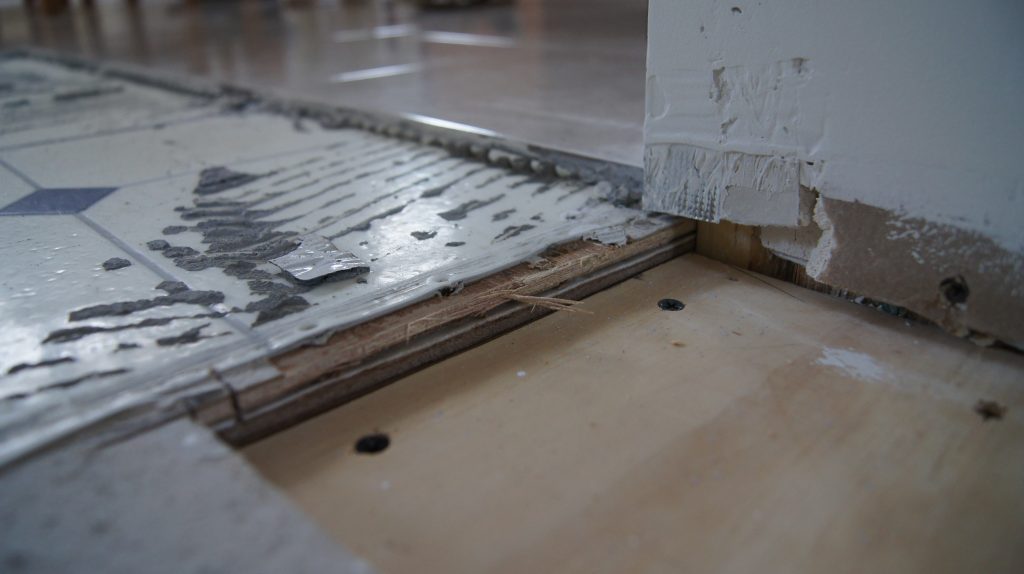 See that picture above?  The fresh wood to the right with screws in it is the sub-floor. To the left, that is a smaller layer of plywood with a vinyl floor on top, with another small layer of plywood with another vinyl floor on top, and removed is the layer of mastic where the tiles used to lay on top of that. ::Face palm::  Whenever we get to renovating the kitchen, removing that flooring is sure going to be fun. Sigh.

We had to take it off in layers so as to not damage the tiles that we wanted to keep in place. 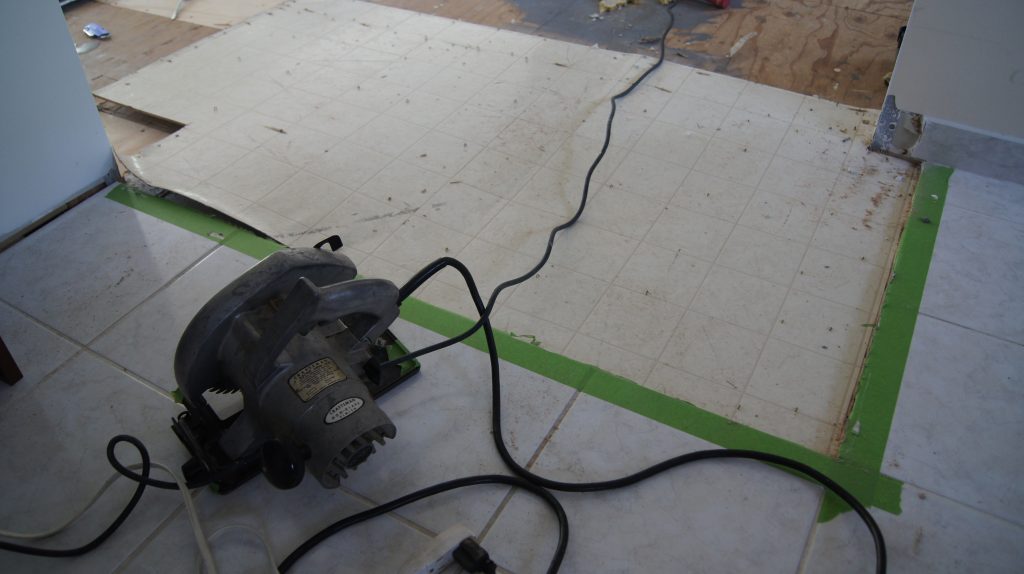 If you’re changing your flooring, PLEASE DON’T DO THIS!  You may save some time and effort, but you’ll just end up putting it elsewhere like on all of the doors and transitions you’ll have to trim down because your floor is now more likely to be taller and not level. Don’t do it.

He got it all nicely out, and we were able to clean it up to run the wood through. 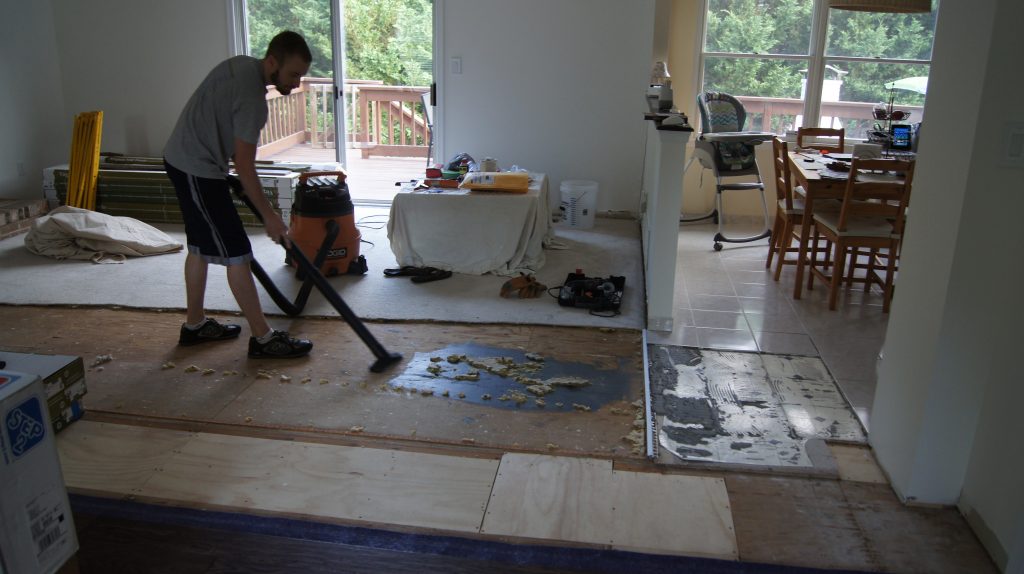 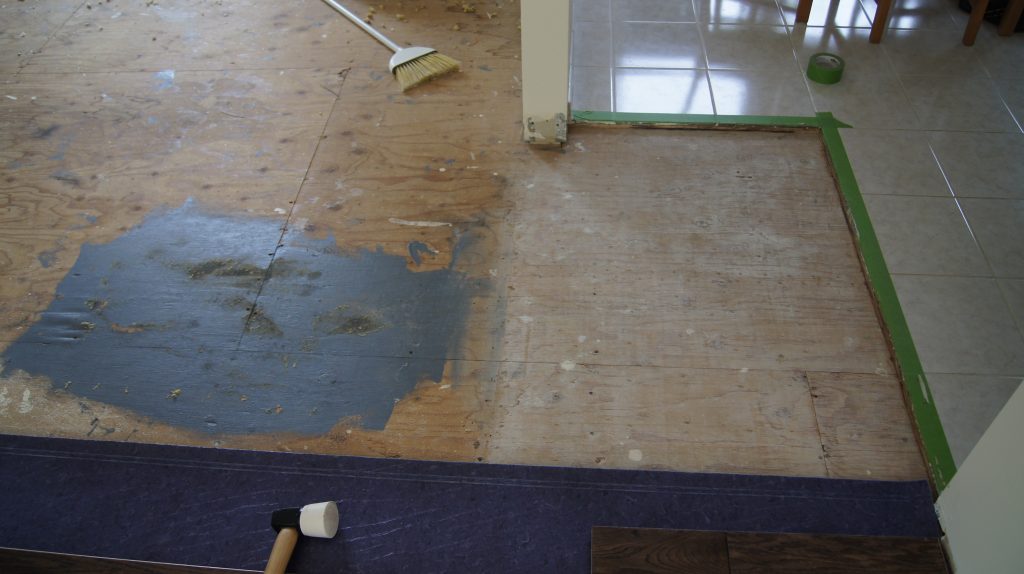 Also notice the massive paint spill we found once we had ripped up the carpet? It was an ugly blue, I can’t believe the living room may have once been painted that color.  I have some pictures on paper from a previous MLS listing of the house, I’ll have to share them here one day.  I love looking at the evolution of a home through the years.

We did get one semi-surprise after David pulled up the old wood flooring. The front door was poorly installed so that the threshold slightly leaned toward the house. We knew that the door was installed poorly since we first looked at the house, but there was no real noticeable damage to the wood flooring at the front. Once it was up though, we saw that the leak was worse than it looked and the subfloor was in bad condition. The water had been slowly running in and getting under the flooring over the years. In the area closest to the door, you could pull pieces of plywood apart with just your hands. 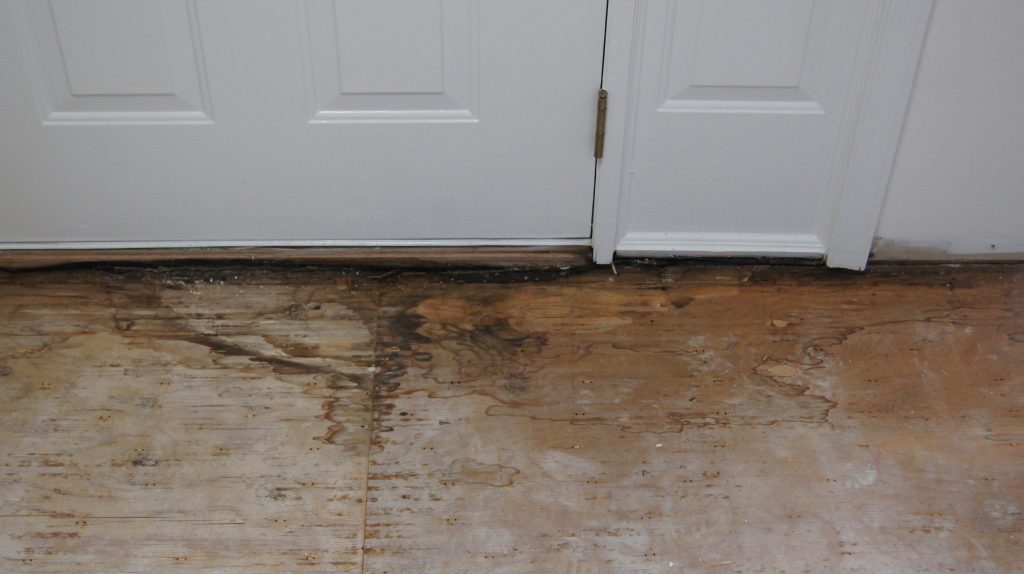 David used his circular saw and his oscillating multi-tool to cut out a 2’x8′ section of the subfloor. Once that was up, he inspected everything looking from above and in the basement. Luckily the plywood was the extent of the damage. No structural issues or even insulation that had been wet. As usual he forgot to take pictures, but in his defense this job had to be done quickly. Huge holes in the floor and toddlers aren’t a good combo. He put new plywood down in place of the old and screwed everything down.

The underlayment was pretty easy to install, you just have to lay it out and make the cuts.  It sits directly on top of the sub floor and will get nailed down when you nail down the flooring. Each piece has an extra flap of plastic which sticks to the previous piece to make a watertight seal. 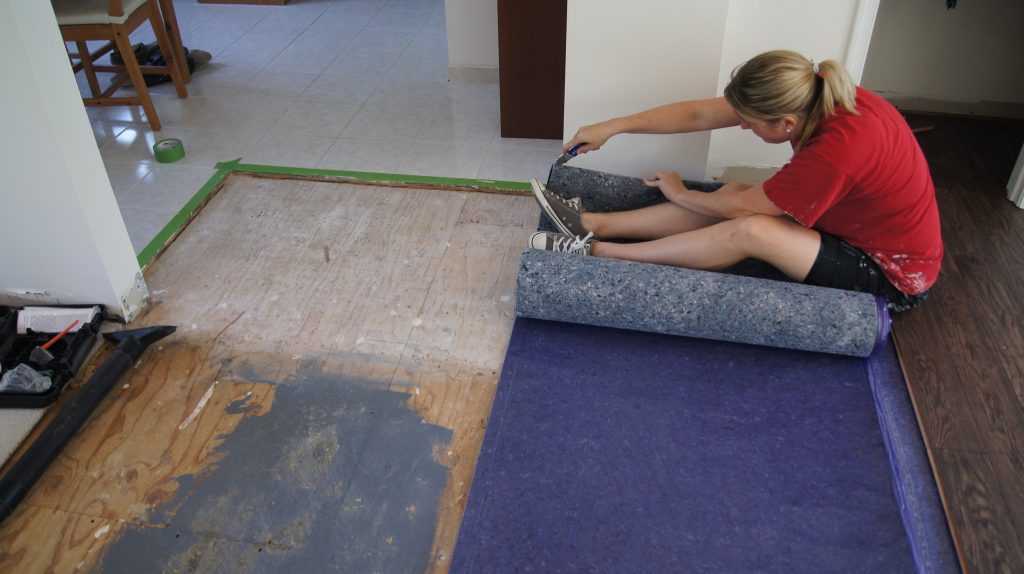 We got half the room done one day, and had to take another day off work maybe two weeks later to finish it. 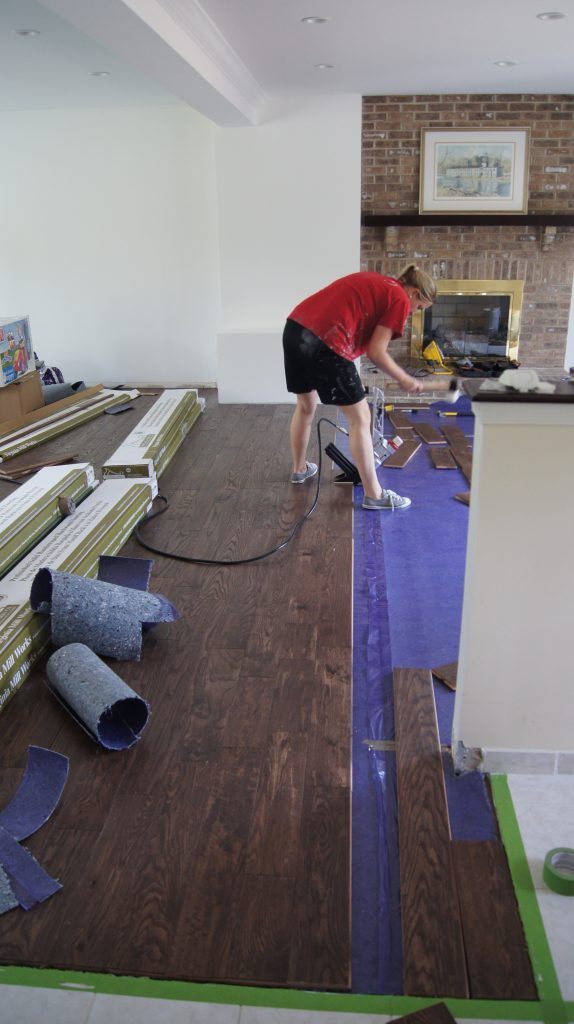 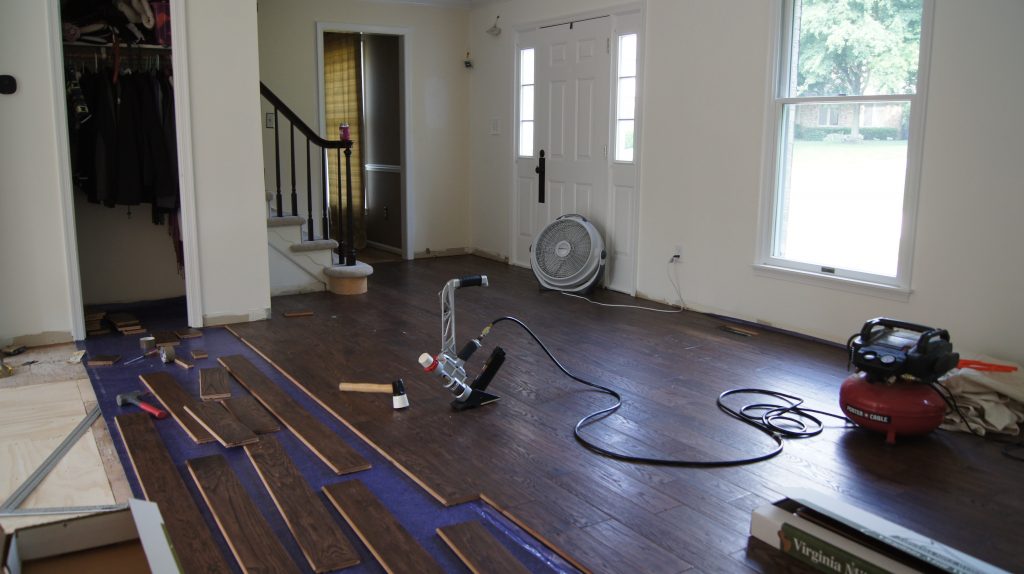 And once it was done, oh my! What breathe of fresh air!! 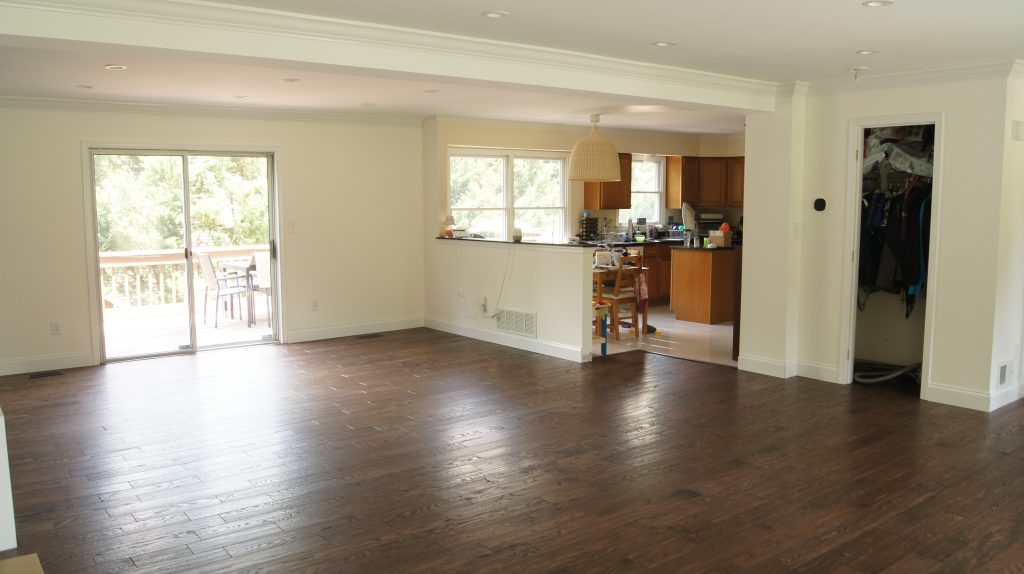 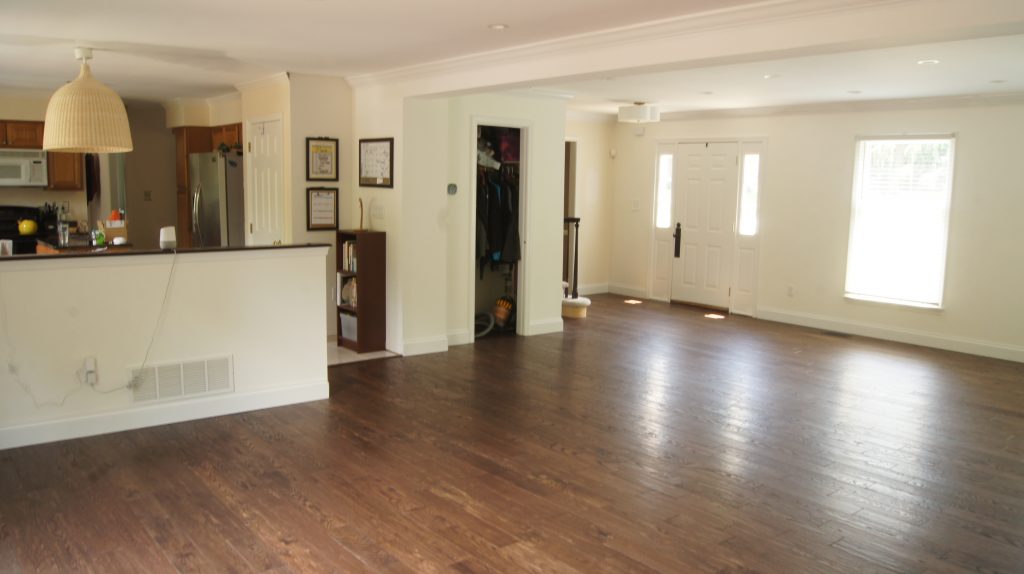 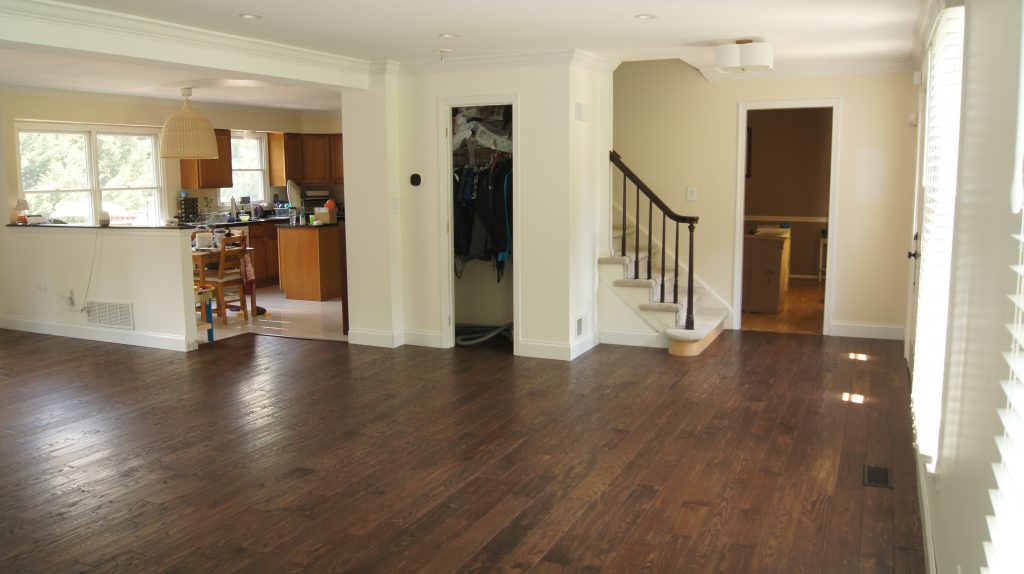 It finally feels cohesive and incorporated into the house now!  And I’m still working on trying to fill it up 😉