This Wall is Coming Down! – HVAC, Electrical, & Drywall

Hope you all had a wonderful Memorial Day weekend! Thank you to all of our armed forces who sacrificed their lives so that we can enjoy the freedom that we have today <3  I read something in the news last week about the National Moment of Remembrance that I probably should have know about before, but I hope everyone took a moment to think about the importance of this holiday.

What. A. Project.  The end is near, you guys!  Yet, not near enough.  Sorry for being so silent these past few weeks.  We’ve been posting over on our IG about some progress here and there, but life has just gotten in the way.  Surviving through the days lately has been our motto.

The good news!  The contractors are all done! (Well almost… apparently there is a rule that you must have a smoke detector in every bedroom before we’re allowed to close out our building permit, but eh, minor details.)  And now the rest is left up to us to finish.  So here, we’ll just detail out some of the rest of the things the contractors had to take care of before they handed it over to us.

We left off in this post, talking about the demo of the old wall and installation of the new beam in its place.  Well, before closing it all back up with drywall could commence, the HVAC contractors had to come back out to run some new ductwork up to the second floor on this side of the house.  They had to wait until the beam was in so they could make sure it wasn’t going to be in the way.

Just to update you, when the wall was taken out, you can see the duct work sticking up through the floor here, and also all of the holes in the floor and ceiling that acted as air returns to circulate back to the HVAC. 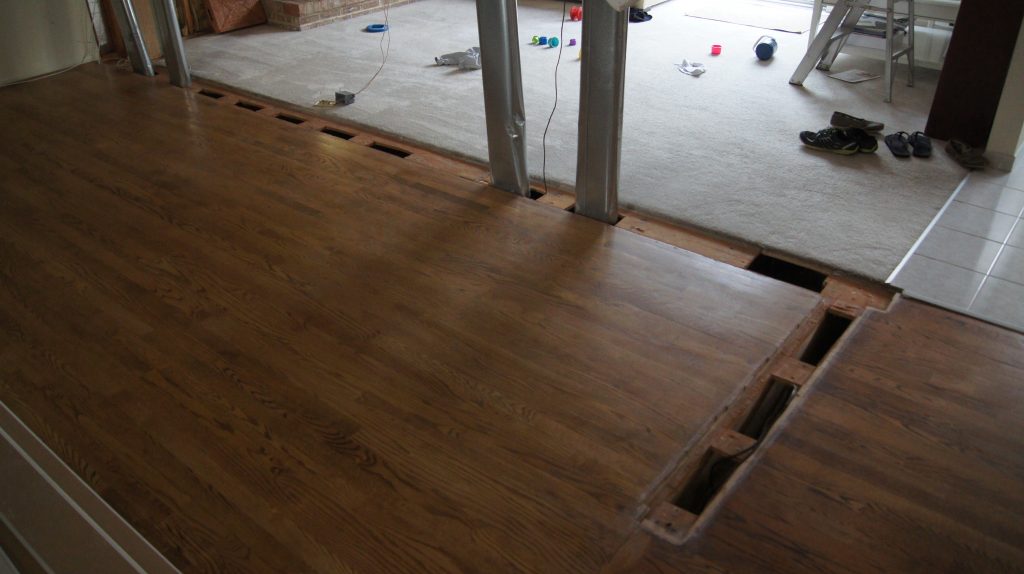 Well, now that the wall containing all of this was gone, we (well, not us, the HVAC guys) had to relocate it up the side wall of the living room. 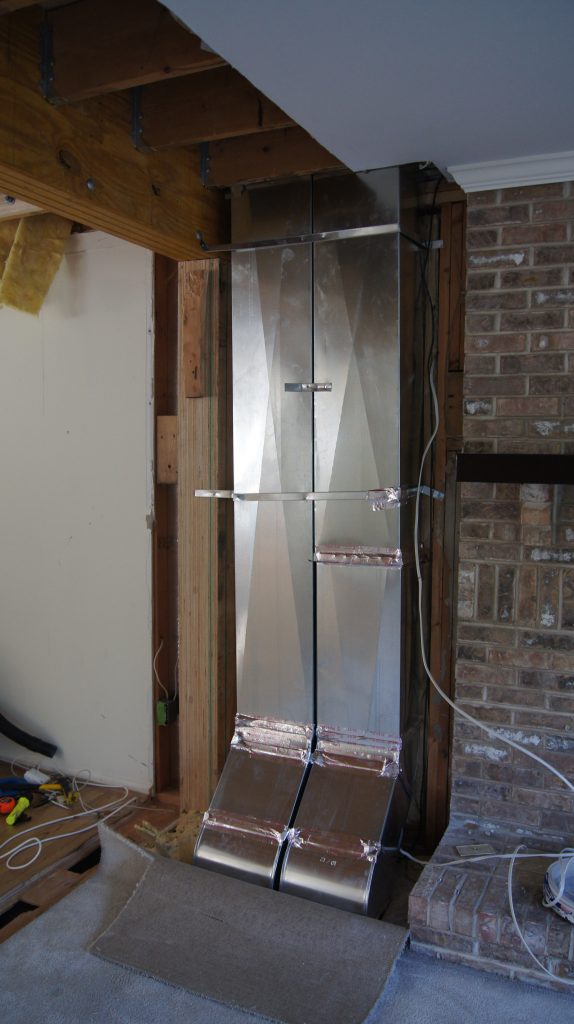 The curves in it looks a little funky, but we had some things to work around between the floor joists to get it to go where we wanted.  Originally, we wanted it to go on the left side of the support beam, in the above picture, but so many things would have been in the way in the theater in the basement, it just wasn’t feasible.  On the left side, we would have been able to run the duct work up through one of the guest bedroom closets upstairs and into the attic from there.

Unfortunately things are never that easy, and rerouting it to the right of the beam meant we also had to run it through the other guest bedroom upstairs instead of a closet. 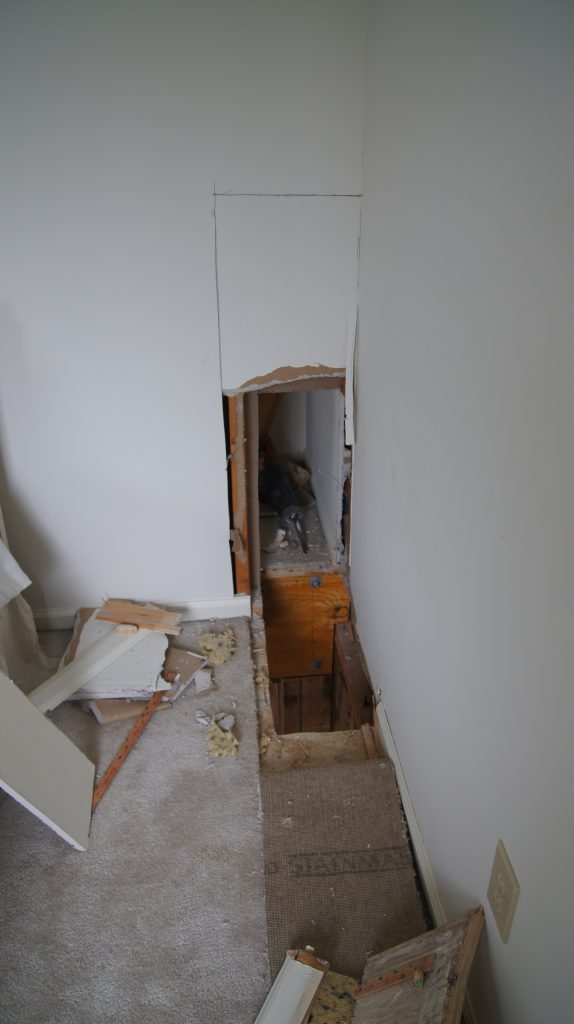 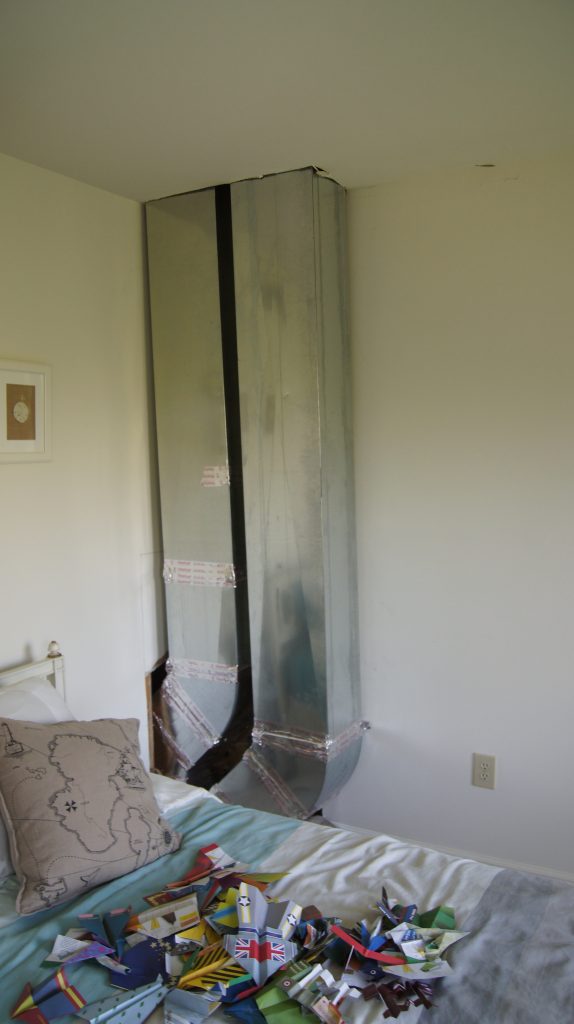 Don’t worry, we’re not leaving it like that!  I’ll show it drywalled up in a bit!  You may be thinking, oh my god, why would you put that massive thing through a bedroom and take up that much space!? Or maybe, WTH are all of those paper airplanes doing there?! Hahah.  (Connor got this for his Daddy for Christmas, so after they get built everyday and played with, they eventually end up here for some reason?)

You may remember the below picture from this post about this room.   It’s HUGE.  So we really weren’t bothered in the slightest that we were taking space from it (ignore all of the crap if you can). 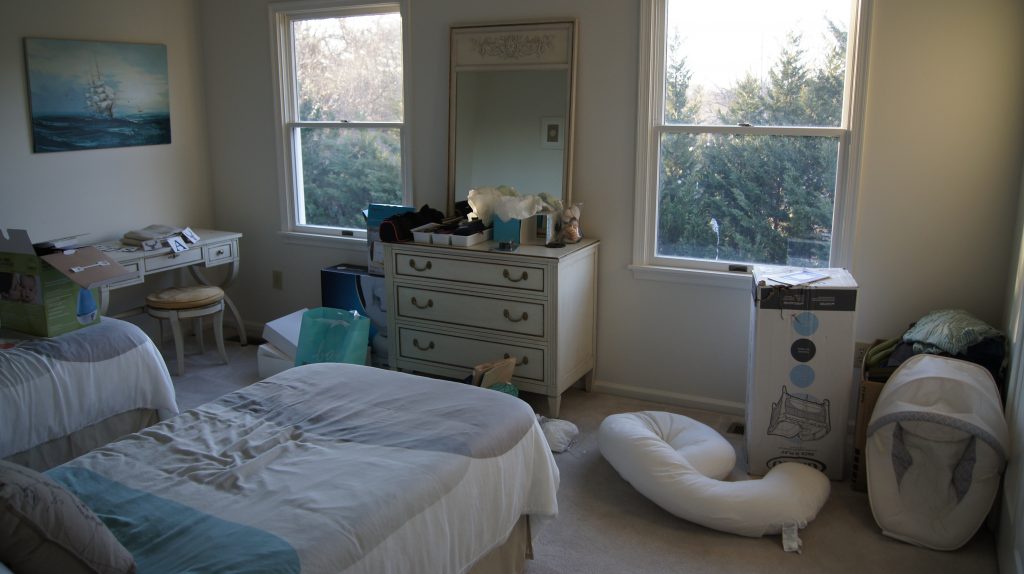 From there, it goes up into the attic and looks a complete mess!  We decided to run lines and do some new ceiling vents to keep the look clean down below in the living room.  I’ll deal with this mess of an attic that we’re barely in rather than a crowded ceiling in the living room any day. 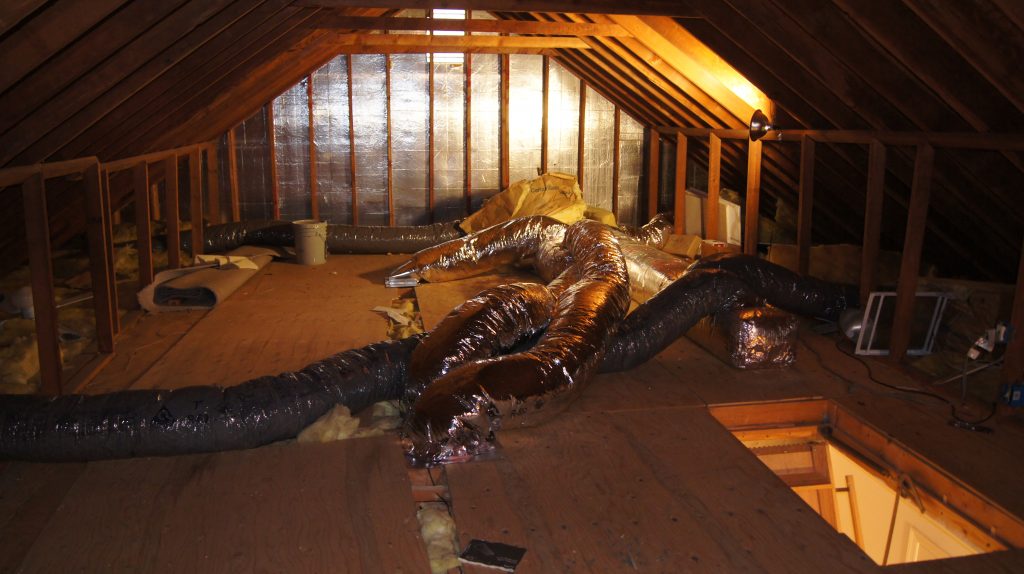 After all that we have a working HVAC with full zoning!  See THIS POST for full details on that.

Part of our contract with our contractor was that David was going to do all of the electrical work.  Partly so we could save money, and partly because this nerd of an computer/electrical engineer enjoys it.  I’m sure he’ll write a post at some point detailing it all out if you’re interested, but we decided that in the large of a room, we wanted it to be well lit.  So we bought 20 recessed lights for him to install. 🙂  Here’s a glimpse of that work (along with his assistant). 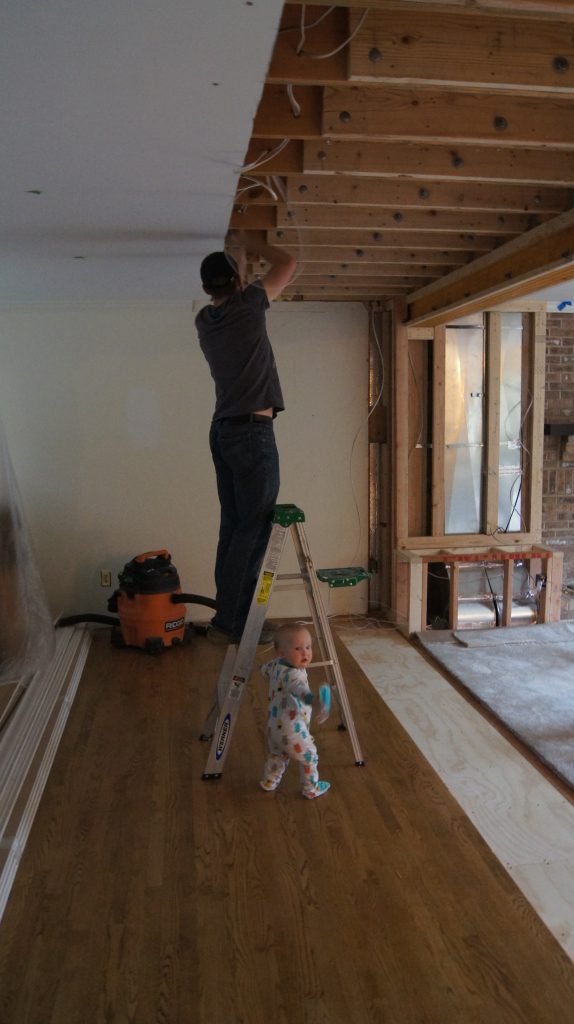 You can see in the picture above that our contractor also got to work on framing everything out for drywall around the ductwork and beam.

Unfortunately, we forgot to take pictures of the drywall guy walking around on stilts (this always amazes me how people spend their days doing this).  Mainly, because this was our view of this part of the project most of the time: 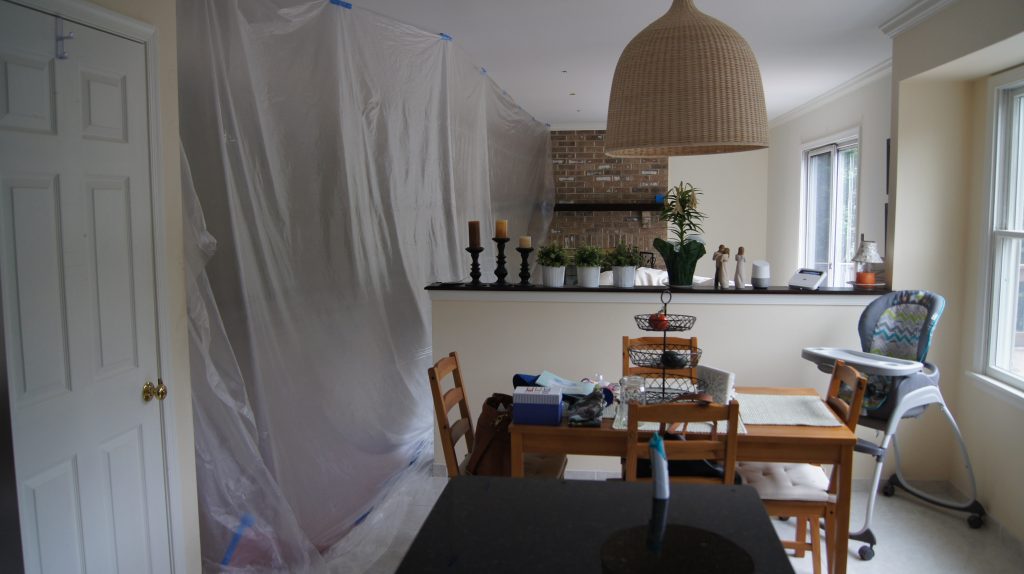 We really highly dislike drywall work.  It’s so hard to get smooth seams when you’re working with large sheets.  ESPECIALLY on the ceiling.  So we agreed to also hire this out.  Plus sanding just sucks.  And it’s such a mess. Here are the freshly drywalled areas with one coat of spackle. After this, there would be a few more coats, and sanding. 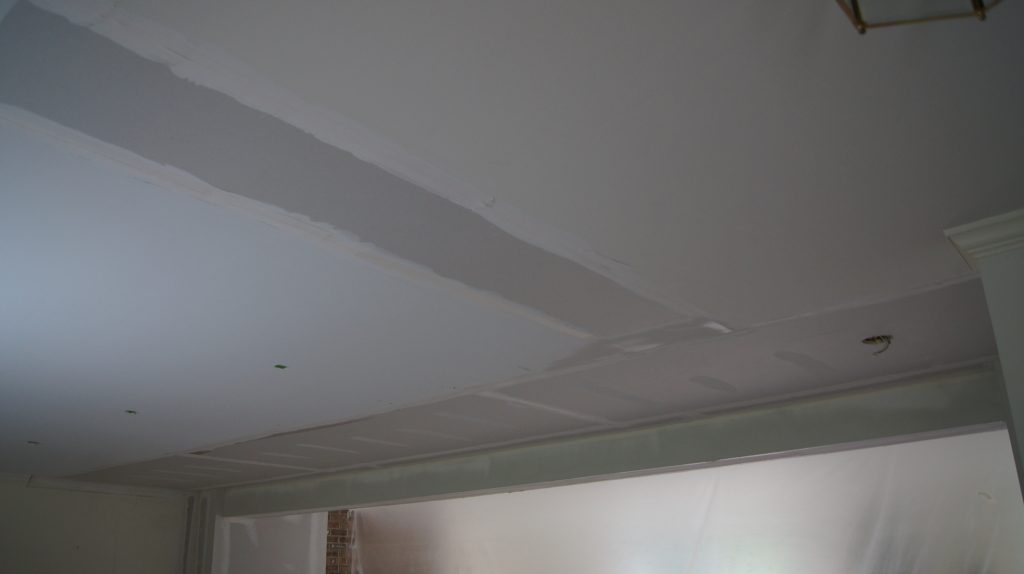 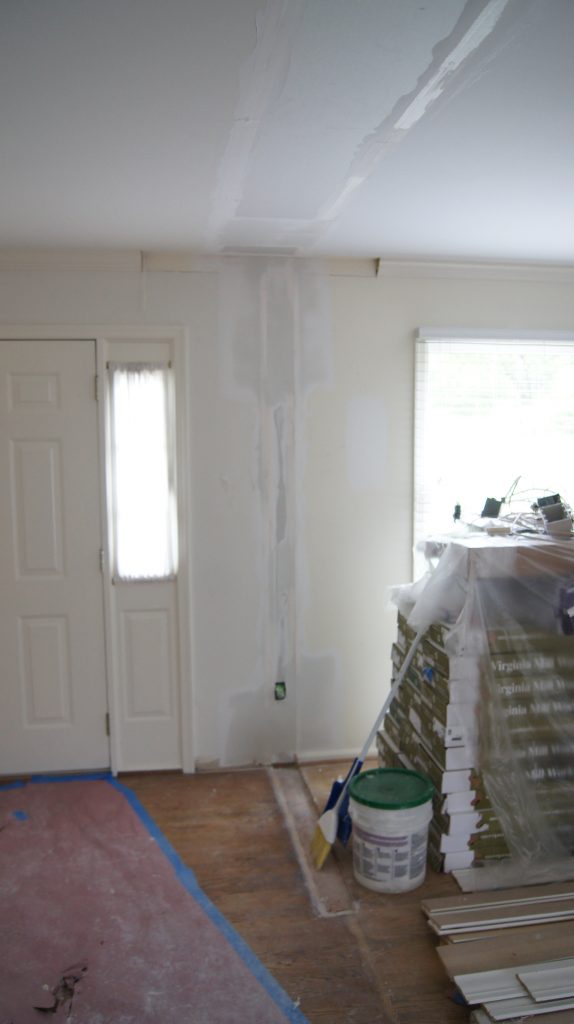 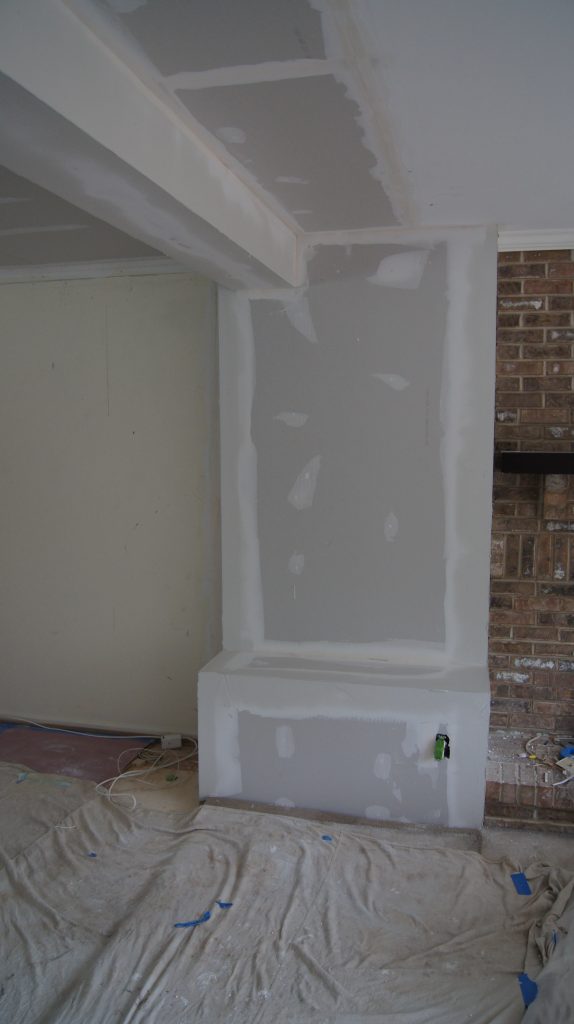 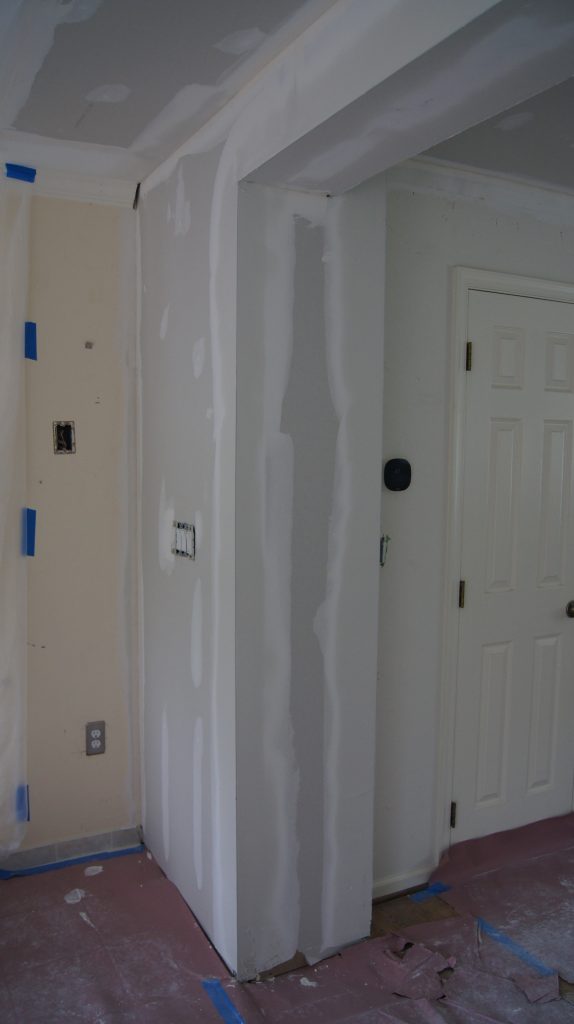 And below is the duct work up in the guest room.  See? All covered up! 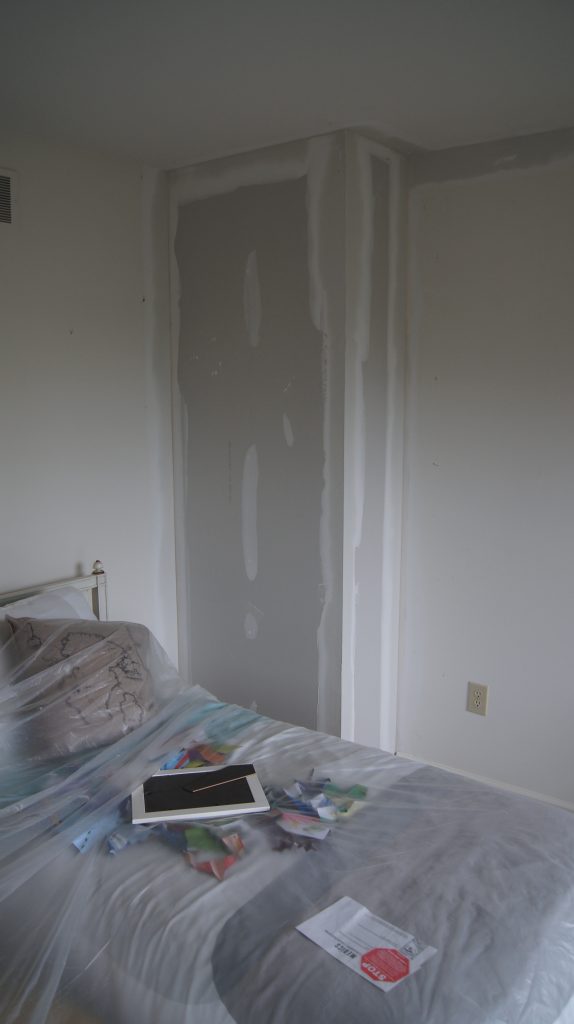 At this point, the county inspector came in and approved everything (with the exception of the smoke detector detail) and it was officially handed over to us for the finishing touches.  So yay for no more contractors at the house!

These past few weeks David and I have been squeezing in priming, painting, finishing the lighting, trim work, and flooring prep during naptimes, after bedtime, tag teaming it with Connor, and even taking a day off of work to get stuff done.  Like yesterday, we spent Memorial day painting and ripping up the old hardwood flooring while Connor was at Casa de Grammy & Pop Pop.  It’s going slow and steady, but we’ll update you as it comes along!  Like I said, the end is near!!  Now, maybe I should start furniture shopping or something so that we actually have somewhere to sit when it’s all completed 🙂

This Wall is Coming Down! – Demo & Installation

A Growth Chart for our Growing Boy (and a discount code for you!)