Did you check out our previous post about how we got started on this wall removal and the HVAC issues we ran into?  If not, you can check out that post here.

After months of scoping out HVAC contractors, and working out the details on the job, we narrowed it down to two contractors.  We finally had two quotes and had to decide between the two.  Here was the situation:

See the issues?  Decisions, decisions.  As engineers, we care deeply about getting the technical details down before we make a decision, and if your company doesn’t have a knowledgeable salesperson employed, than we’re either not going to go with you, or we’re going to ask you to bring in the engineer/owner/designer of your company so we can ensure that we get good details about the quote.  With contractor 1, after the first meeting, we pretty much told them that the owner needed to be there at our meetings to answer our questions, because we couldn’t handle the sales guy. The sales guy knew about their HVAC systems, but didn’t know anything about re-routing duct-work, and that’s what we contacted them about in the first place. With contractor 2, we did most of our decision making with the sales guy and only brought in the owner when we needed to nail down some very specific details.

Contractor 1 was offering a Daikin system which is of the newer, lesser known variety in the HVAC realm of things.  It’s less known, but has a pretty good warranty of 12 years.  Contractor 2 was offering a Trane system which are really well known and high quality.  The warranty was two years less than the Daikin, but really, in those conversations about warranties with the contractors, it just made David think of this:

If you see where we’re going, we were pretty set on Contractor 2, but we just couldn’t quite bring ourselves to pay his price.  We knew it was going to be higher quality, but the price difference was pretty significant.  So we told him his price was too high. At this point he offered the Bryant HVAC system which is of the same maker of the Trane system, just a step down.  This brought the price down, but not enough to meet contractor 1.

During this time, David had been researching thermostats and asked both contractors about the pricing if we had provided the thermostats.  They’d have to be wired a little different, and contractor 1 said the price wouldn’t change and contractor 2 decreased his price even more.

At this point there was a much smaller gap between the two quotes, and we flat out told contractor 2, if you meet the price of contractor 1, we’ll go with you.  Done.  They agreed.  Contract signed the next day.  David and I reacting to finally making a decision on this wall (sitting at our dueling desks of course):

Fortunately and unfortunately, contractor 2 said they would only do the job before May, otherwise it entered into their busy season and they wouldn’t be able to do that large of a job.  So it really got our butts in gear to finalize the wall removal contractor.

In the meantime, the great thing was that the HVAC contractor could do 90% of their work without having to do anything with the wall.  We scheduled them to come out the following week and get started on replacing the furnace and the AC unit.  And they brought out their whole team.  At one point, one of the installers said he thought the entire fleet of company vehicles was parked outside our house.

They had two groups, one working on the furnace, the other working on the AC unit.  The first group had to take on this beast of an old 1993 furnace (this is in the storage room down in the basement, by the way): 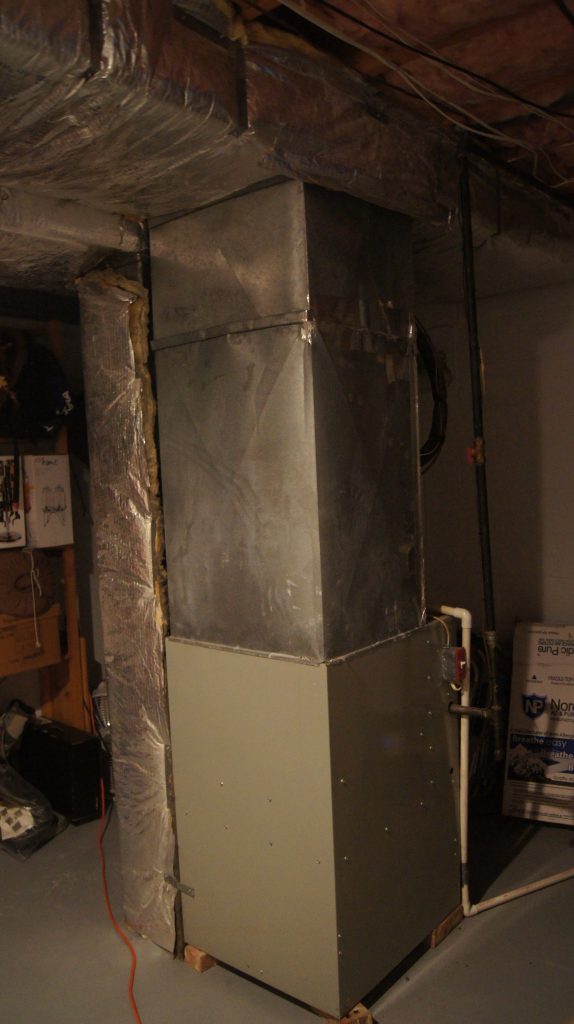 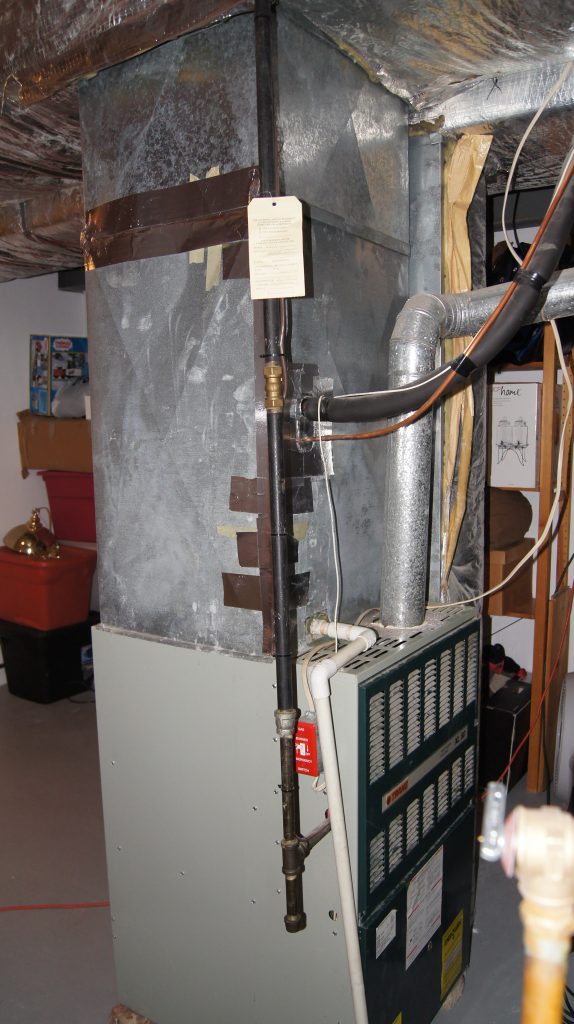 They got started and it soon looked like this: 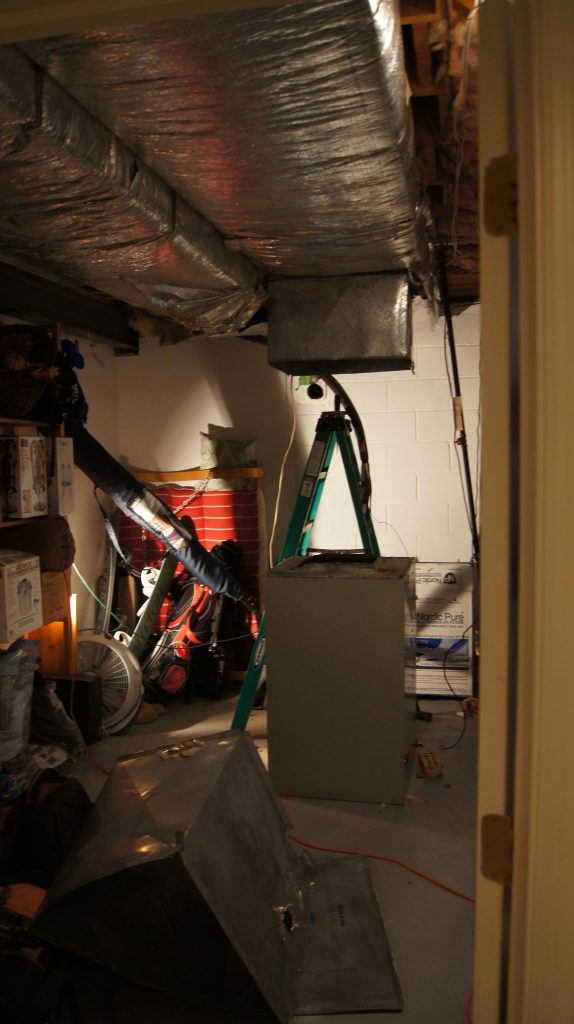 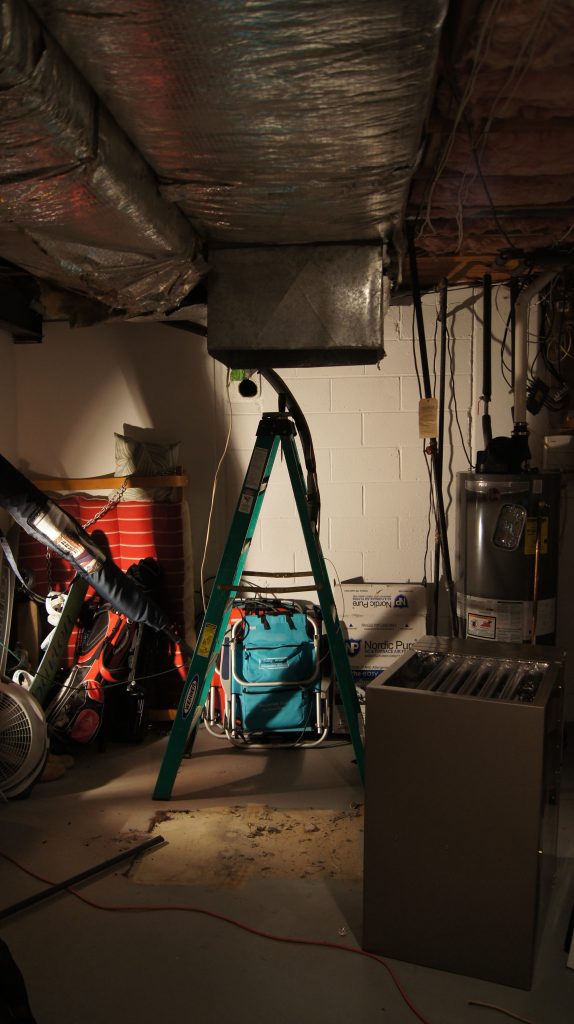 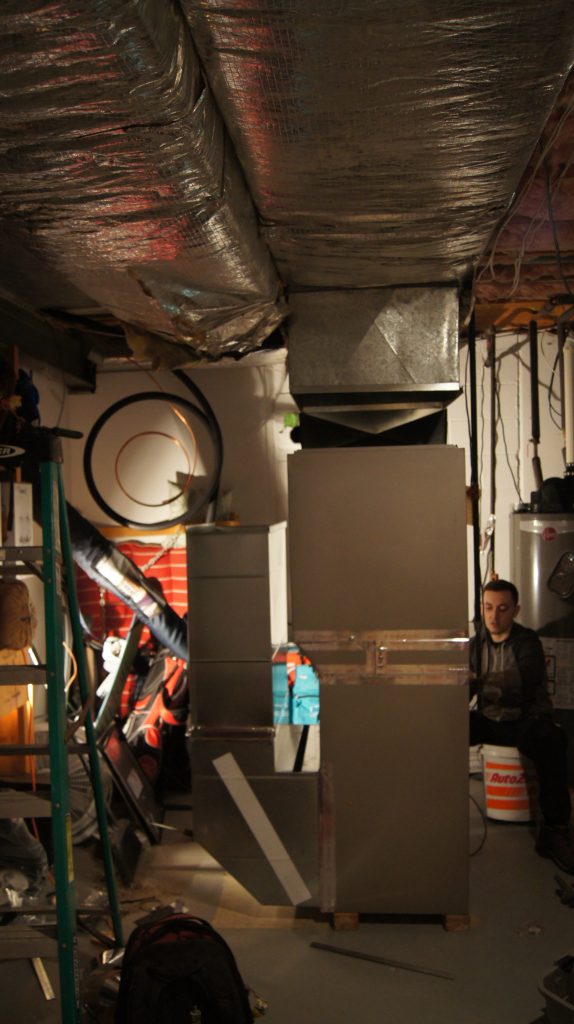 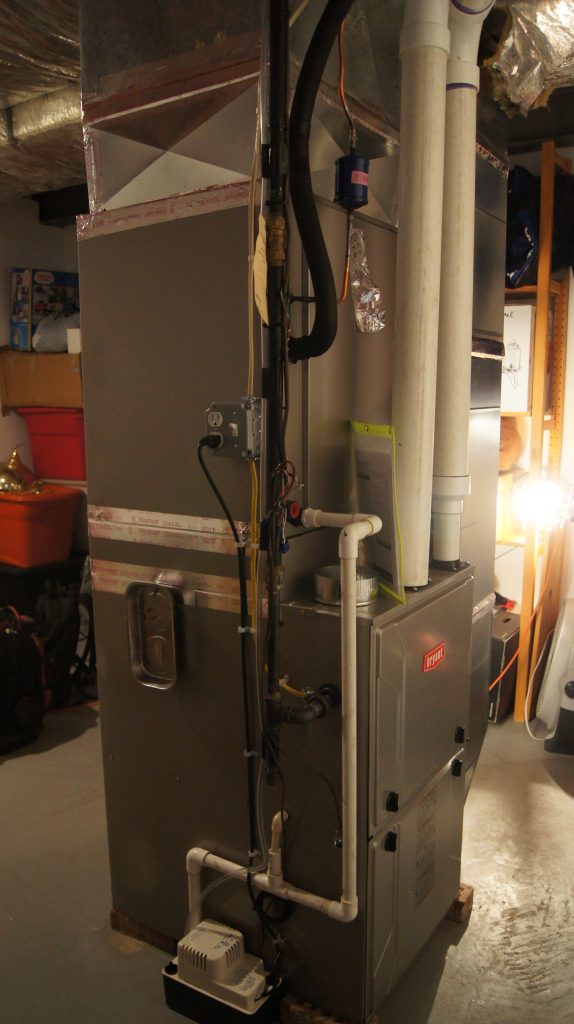 We’re not experts on HVAC units so we have limited knowledge on calling out certain things in these pictures.  One of the biggest lessons we learned from this process actually started last year when David was consulting in South Carolina, and I was home with Connor, the water heater decided to make a huge hissing noise and die.  David ended up replacing it with the help of his dad (we may talk about this in another post), but with the newer, high efficiency systems, the type of exhaust they put out tends to have more moisture in it than the old ones. The exhaust has to be pushed out with a blower through the side of the house with PVC pipe.  Our old water heater exhaust and old furnace exhaust were simply piped up to exhaust out in our chimney. 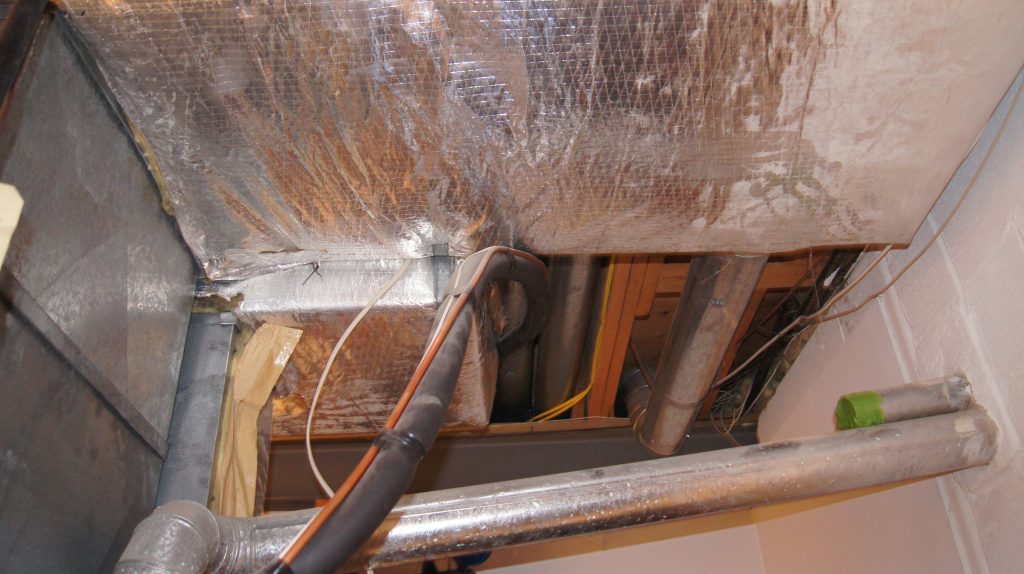 You can see in the above picture the pipe that is taped off in green was for our old water heater.  The one piped in below it was to the furnace and has to be removed with the new furnace and switched to a PVC vent.

If our old water heater was still working, we would have either needed to get a new one that vents with PVC, or add in a special ($1000 installed) chimney liner to accommodate for the change due to building code. Luckily, since our water heater died anyway, we no longer had to worry about this and they could just seal up the chimney.  David and his Dad did an awesome job with the water heater exhaust relocation, but when the furnace guys went to relocate it to a similar area, there wasn’t much room and there are codes on how long the tubing can be before getting out of the house.  Long story short, they found a spot, but it definitely gave them a bit of a headache.

The closed up the old vent line (they sealed them up for reals after this picture was taken, don’t worry): 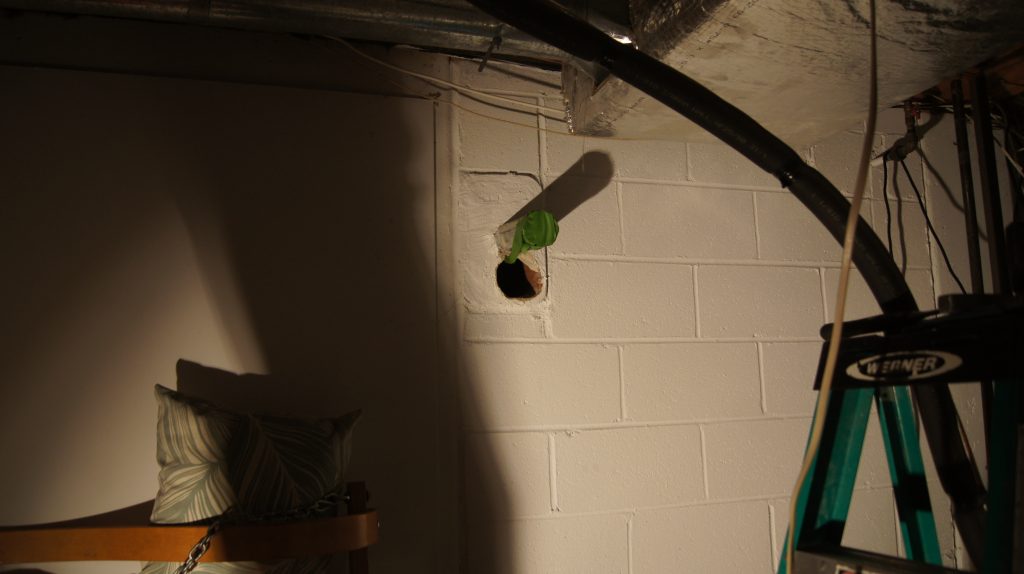 This mess of a corner shows the water heater vent: 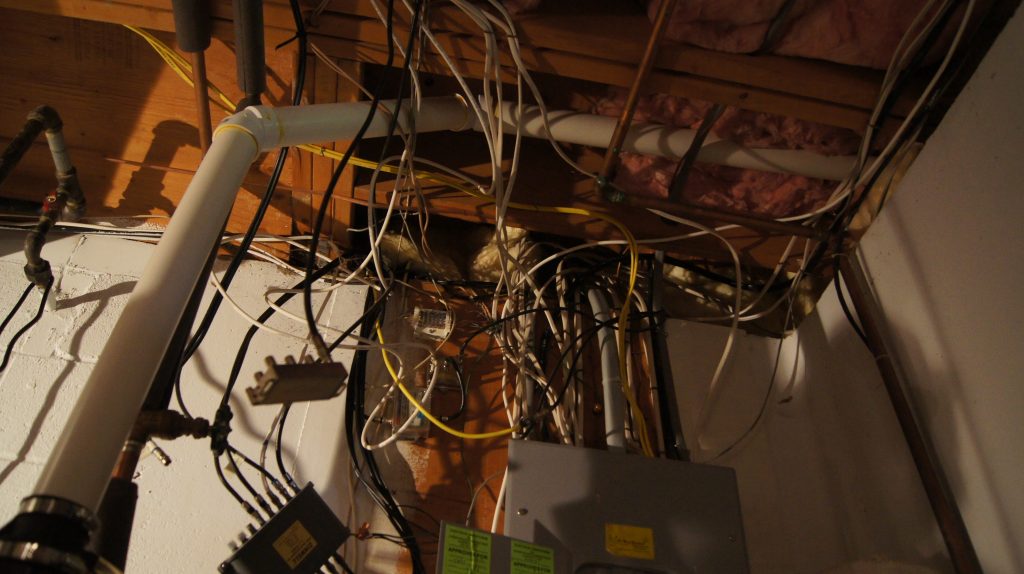 And this picture shows the same situation above, except now with the furnace intake and exhaust pipes piped in: 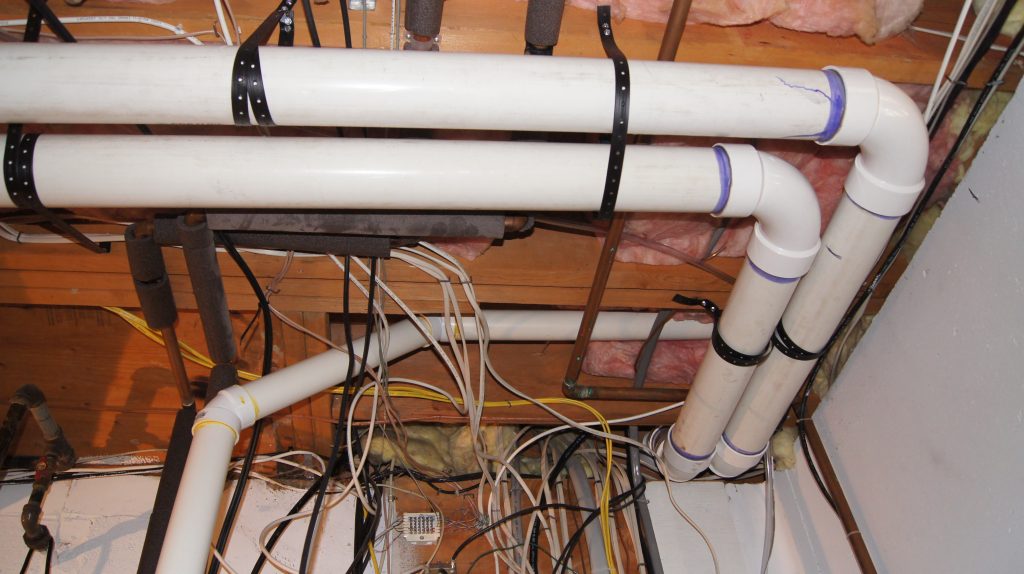 You can see the water heater vent to the left here, and the new vent location for the furnace the guy is drilling on the right here: 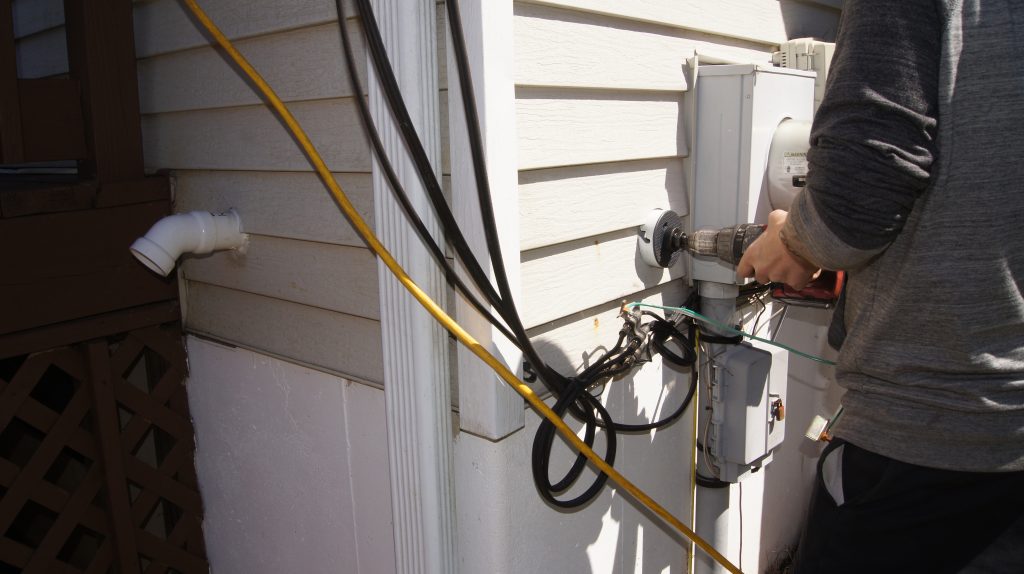 Not too far away from the vents, on the other side of the chimney, the second crew was working on the AC unit, which I think was a little more straight forward with respects to removal and installation of the new unit: 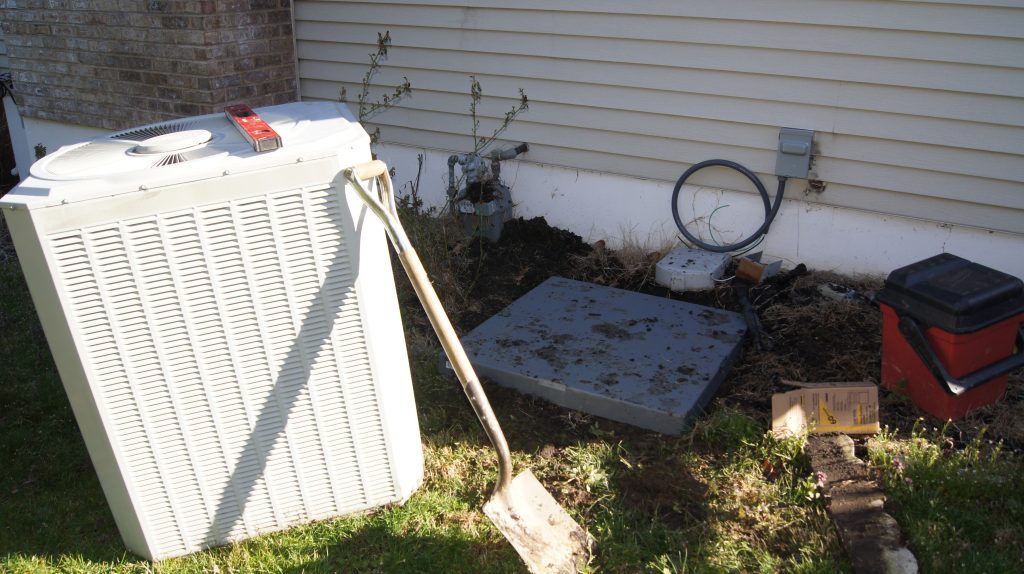 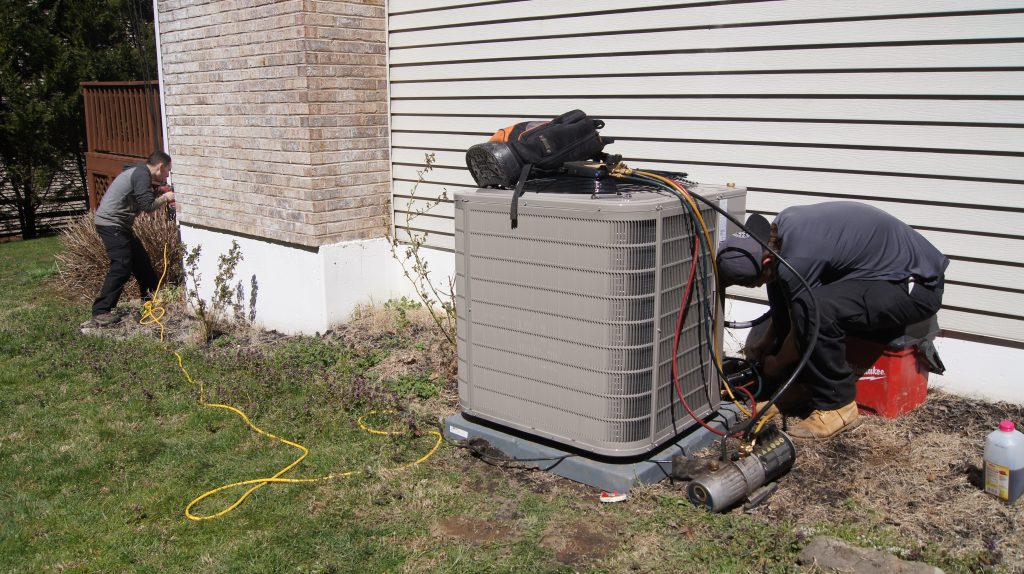 Ignore our weeds.  That side of the house doesn’t get seen very often, so it’s not high on our priority list hahaha.

We also decided to add in a whole house humidifier since the cold Delaware winters tend to take a toll on our Asthma and drying out our skin in the winter: 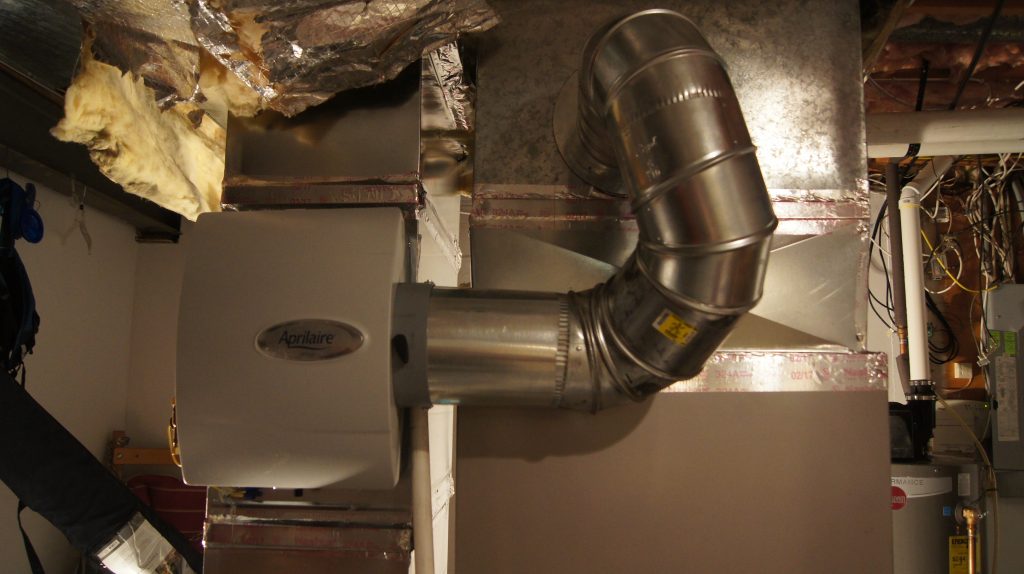 Side note, David thought this thing below was awesome (it’s a magnetic pan that holds all of the screws for easy access)…. maybe I’ll have to get him one for Christmas 😉 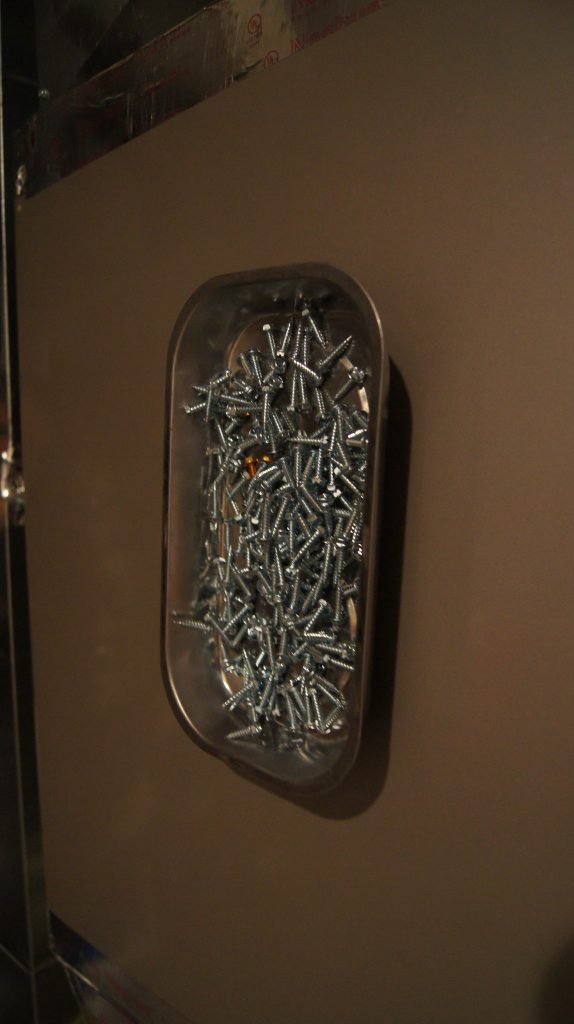 Last but not least, was installation of the dampers for the areas of the house unaffected by the wall removal.  We went with the electric Honeywell dampers because Honeywell is pretty highly respected in my chemical world, and also because David could easily troubleshoot electric dampers easier than pneumatic ones if we ever have an issue in the future. 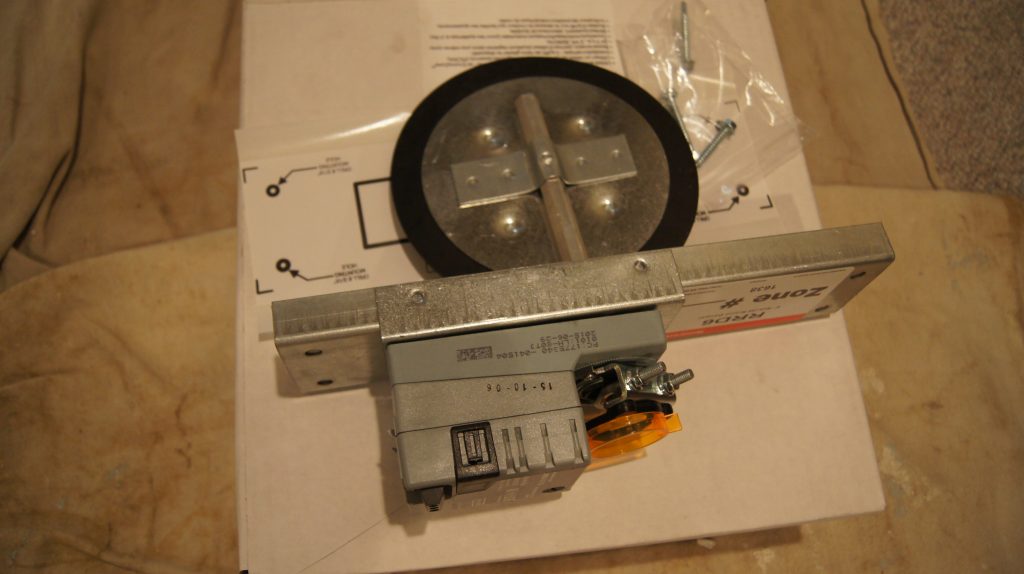 They act like valves in the supply vent for the AC and heat, and will open or close depending on the call for heat or AC needed in that zone. 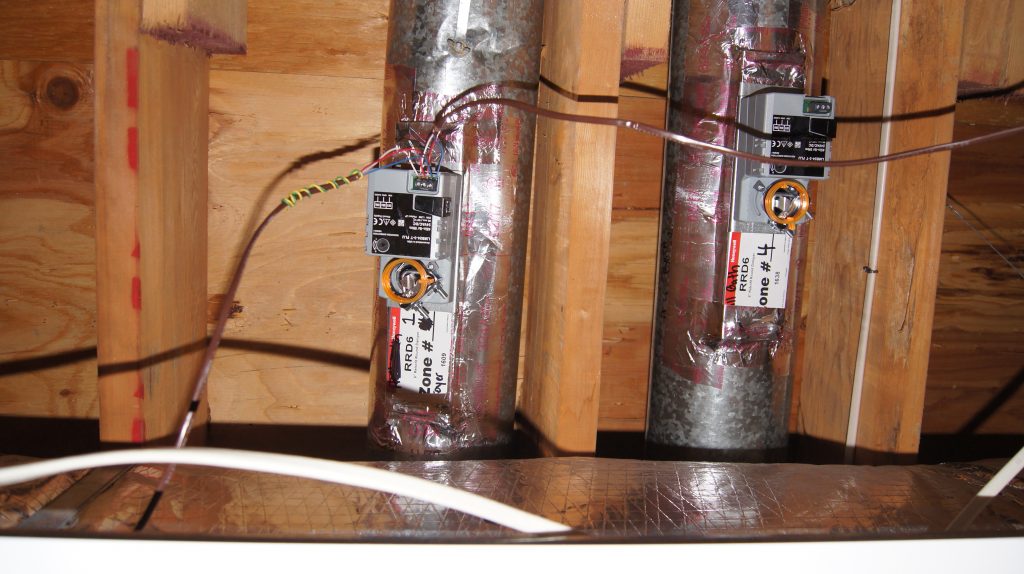 Here, they’re installing one of the thermostats in the office zone (with Riley’s help of course): 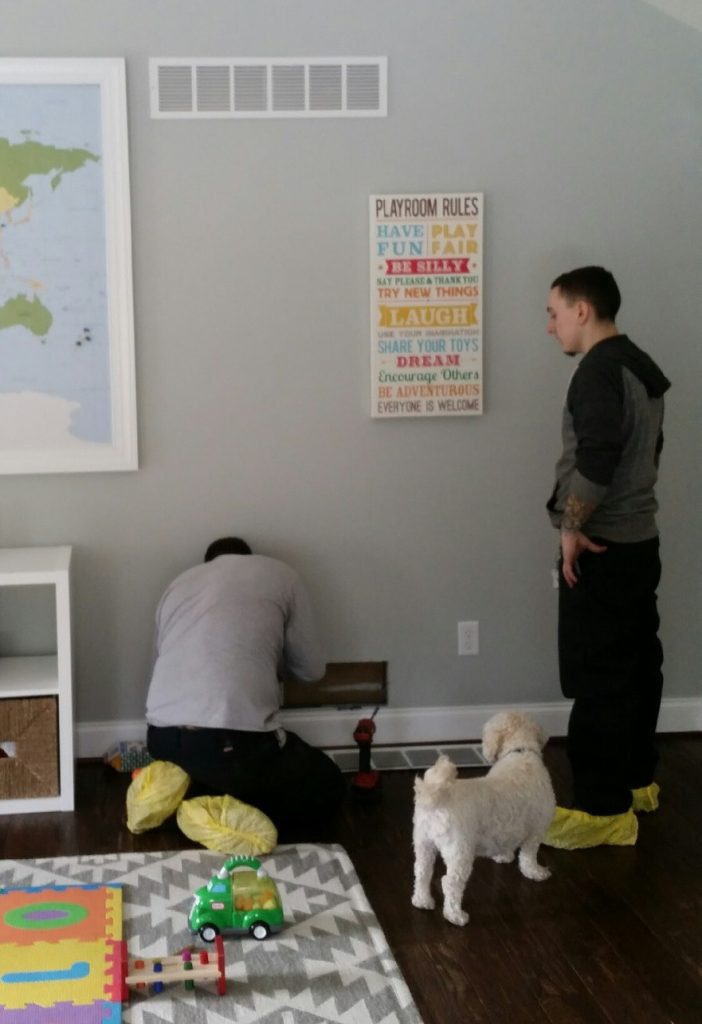 And that’s about it.  Unfortunately, they’re not the prettiest pictures to look at, and it’s not the most glamorous of projects, but we really feel like if you have a good foundation of important things like quality utility systems, sound walls and foundation, and good bones of a house, then you’re off to a really great start in your dream home.  And this wall removal and HVAC replacement is a step in that direction for us!

Next week, we’ll go into the design of the beam that’s going to hold up the second floor of our home!  Thanks for reading!

Tom replacing the oil furnace with natural gas and all replacing all ductwork with rerouting and resizing from original (luckily all is in basement). Tom learns HVAC design and is doing all the work.

Then we will be ready for the new beam to open up two rooms (probably 16 feet long) but only has to support a roof.

Thanks for the comment, Tom. That is quite an undertaking, running all of the ductwork yourself! We’d love to hear about how the project is going. Ashville is one of our favorite cities, so much good food, beer, and places to hike.