Shiplap vs. Nickel Gap: Making Your Budget Work For You

This is going to sound weird, but I’m just going to come out and say it; one of my favorite renovation projects so far was the powder room in our Charleston house. Really? A bathroom? And not even like a master bathroom with a waterfall shower and a huge tub? Yeah, really, just a powder room. And I can sum up why in one word: “shiplap.” 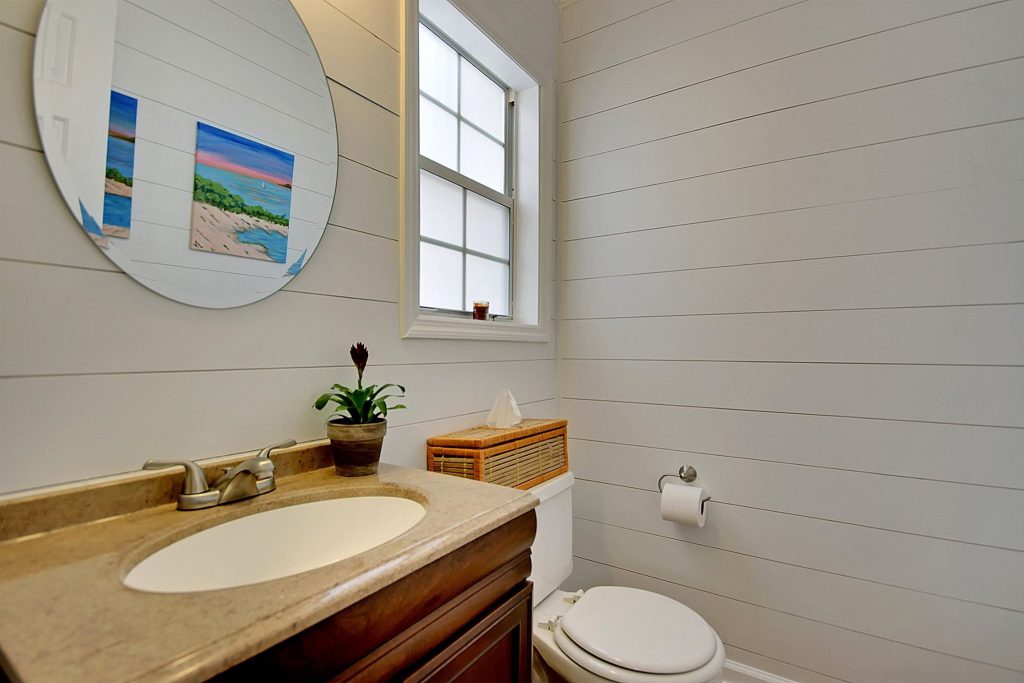 Actually it’s really two words: “Nickel Gap”. So what’s the difference, and why does it matter? Well, technically shiplap is a type of board with a rabbet joint which allows the boards to overlap. The bathroom above did not use real shiplap, but it essentially looks like it. Instead we used a method called “Nickel Gap” which is simply spacing the boards the width of a nickel. This method is more time consuming, but can be done for significantly cheaper and yields a similar result.

For the boards, we used 5mm plywood, which is about as thin as plywood comes. At about $13.50 for a 4’x8′ sheet, you can really make a room interesting for cheap.  We bought 5 sheets at Lowes and had them cut in-store to 6″ wide strips lengthwise. I think the guy who did the cutting probably still breaks out into a cold sweat when he hears “Customer assistance needed in the board cutting area… bing bong… board cutting area.” I don’t know if they have rules about a number of cuts they’ll make per board, but he did seven cuts for us. He cut all five of the boards stacked, which definitely saved time, though. I could have cut the strips with my table saw, but I never would have been able to cut them as straight and even as in the store.

We brought the boards home and I sanded the edges well. Even with an electric sander, this sucked. While I was doing that, Carolyn was removing wallpaper (which, admittedly, sucked a lot more) and then priming the walls with white. With nickel-gap you’re going to see the wall between the boards, so you definitely need to prep the wall for it. Looking back, we felt kind of dumb though for wasting time removing the wallpaper when we could have just painted over it in this case. You wouldn’t have been able to tell through the nickel-sized gaps. 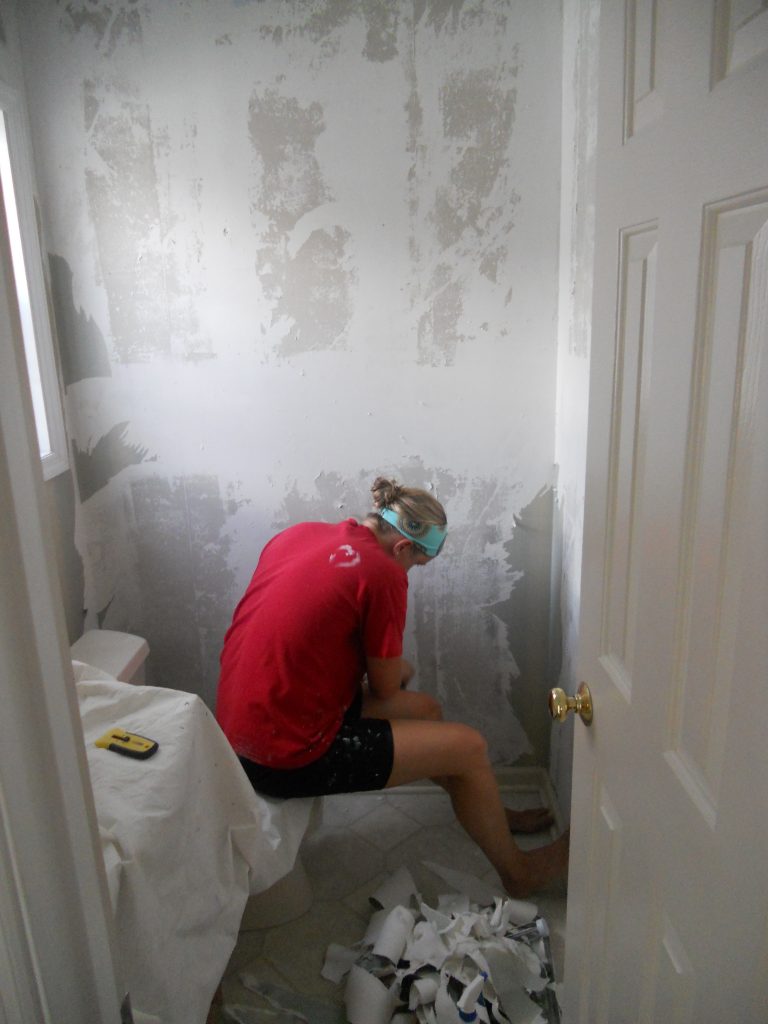 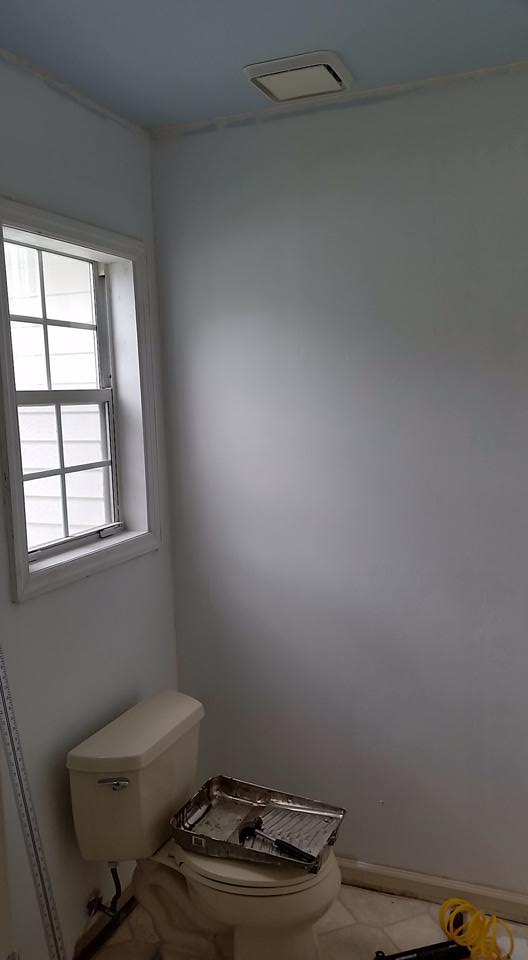 Walls are primed and ready

We started with the longest wall with no plumbing or electrical and cut each board to length. Then we started installing from the top. We chose to start from the top for two reasons: 1. We were going to install crown molding, and wanted to make sure we didn’t end up with a gap close to where the crown would start and 2. If the board started to get off level, it would be easier to notice against the crown than the base molding. 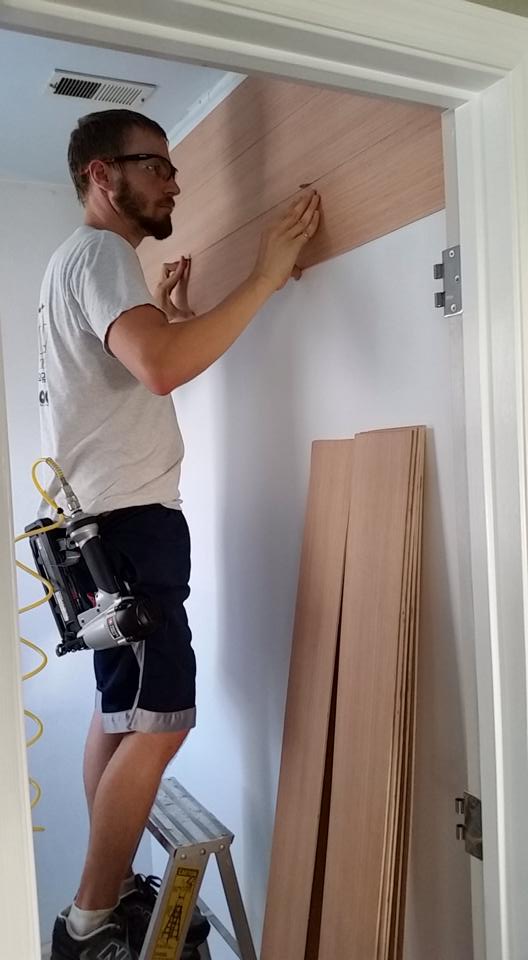 We leveled the top board and then used nickels to space each board apart. It’s hard to see in the picture, but we marked chalk lines down the entire wall where the studs were so we could nail the boards into the studs. We did a high and low nail on each stud for every strip. The plywood is so thin and flexible that we wanted to be sure it wasn’t going anywhere.  When we got to the next wall, we used the first wall to line up the side of the board so the seams would be even all the way around. 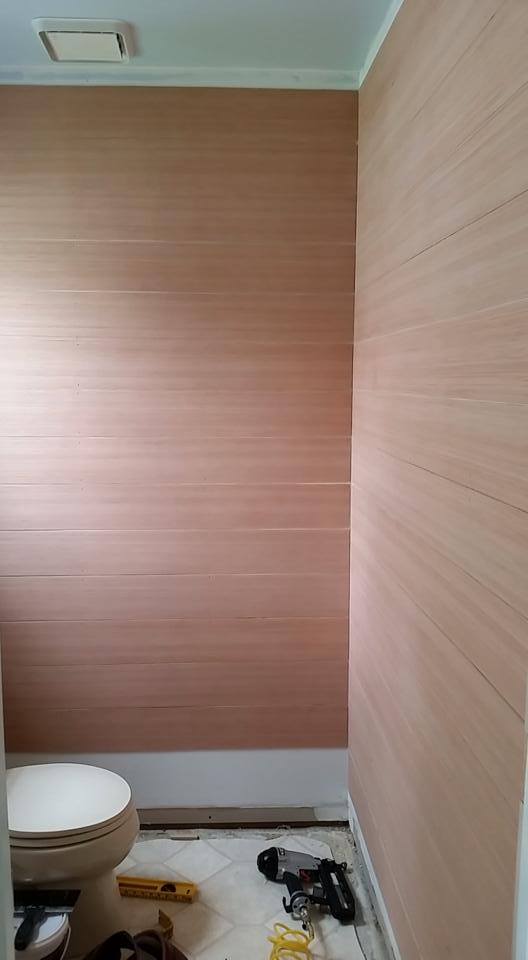 We couldn’t wait to paint over that orangey wood color

We did the final two walls, which were more difficult and involved more cutting due to the window, door, plumbing, and electrical. We removed the vanity and toilet to complete the nickel gap. We could have worked around the toilet, but we were replacing the flooring anyway. Then the final touch of the woodwork was the corner molding to go vertically at the joining of each wall. It kept us from having to be super exact with our length cuts which would have been hard, because walls are never straight. Finally it was time to paint. I let Carolyn handle that task. I thought rolling the paint was going to be a bad idea with paint collecting in the gaps, but she did a great job with it.

Now I know you just want me to gloss over the rest of the room here since the room (flooring, base, shoe, and crown molding, vanity and toilet install, fixtures, and electrical), and get to those sweet, sweet after pictures. So here they are. 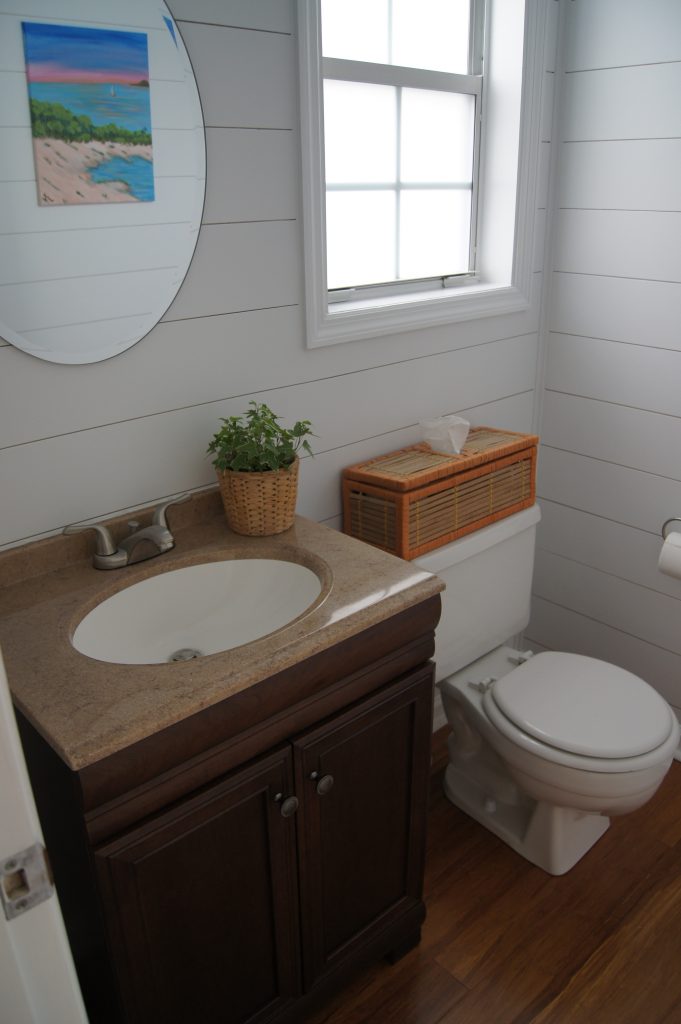 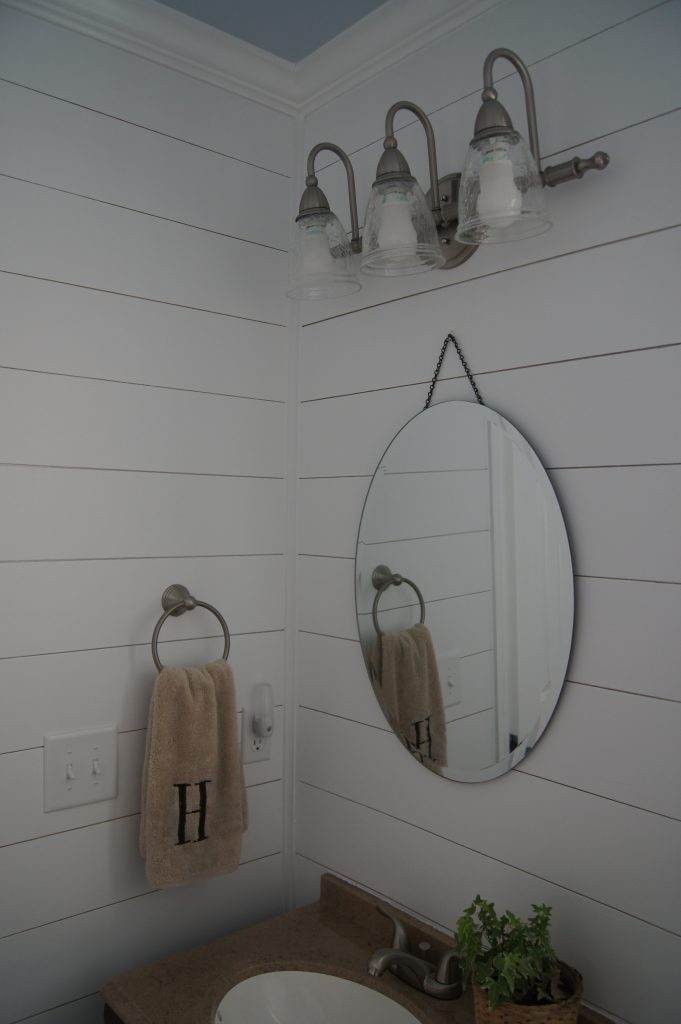 We think the nickel gap really gave the room great character. Besides our kitchen, the walls in the powder room got the most attention from friends, family, and potential buyers when we listed the house. We did a lot of other work in the room, but the nickel gap made the biggest impression.

Fast forward a year-and-a-half when we were working on Connor’s nursery. We wanted to do another plank wall, but decided this time to use tongue and groove boards. We were looking for real shiplap but couldn’t come up with anything from our local stores. We found some 1″ x 6″ pine tongue and groove board at our lumber yard that was textured on one side and flat on the other, but they only sold it in 16′ lengths. The wall we were installing it on was just under 12′ long, so we would be wasting a lot of smaller pieces or making a lot of seems if we used them.  We decided to check out Lowe’s and Home Depot, and found a great, cheap option at home depot for the same thing, except it was sold in 12′ lengths, so we would have very little waste and no need to make seems. 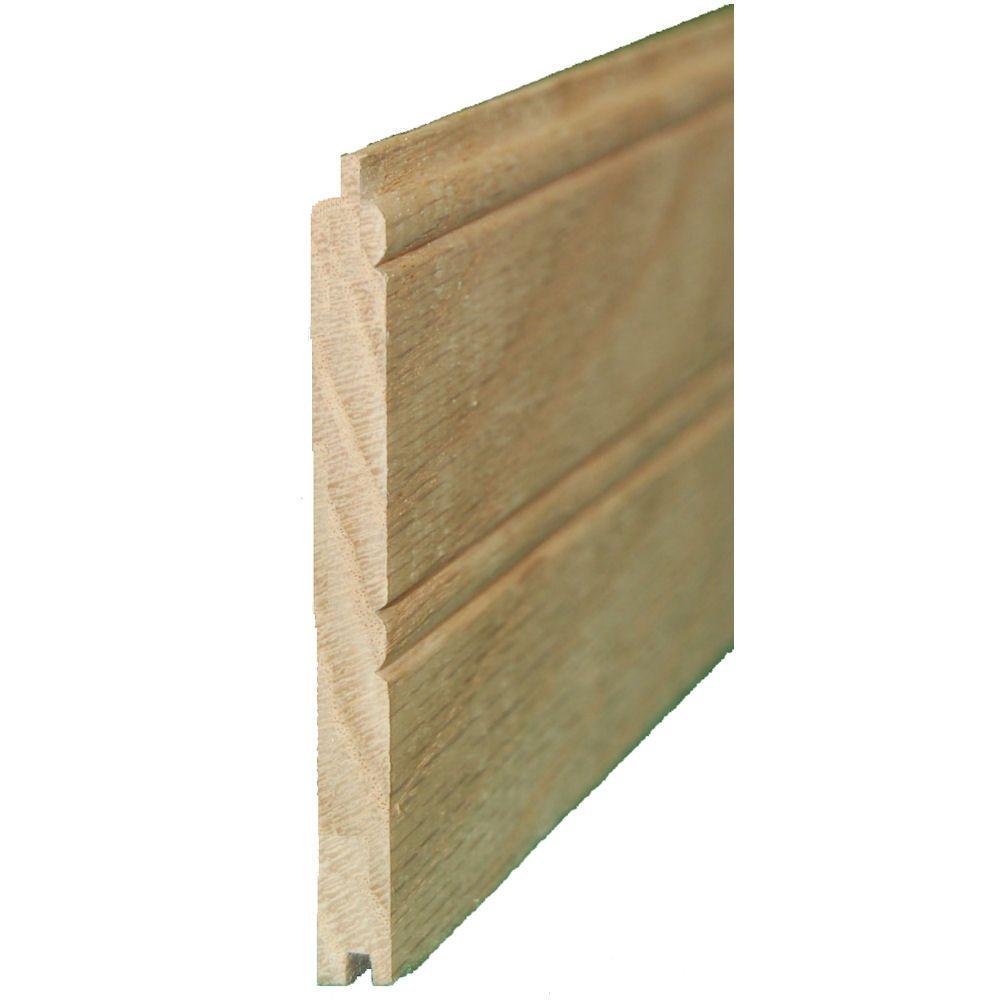 We snapped our chalk lines for the studs and got started.  With the tongue and groove, we started from the bottom and worked our way up, as it was easier to stack it up the wall this way. We nailed the bottom piece in straight and used enough nails to really hold it in place. Every row after that, we only needed to nail down at an angle into the tongue on each stud. Nailing into the tongue means the nails on each board are hidden by the board above it. Woohoo! Less wood putty!

Installation was very easy and quick with the exception of working around the outlet (which we couldn’t have had any more perfect placement with the height, by the way) and the window sill, which was just short of touching the drywall.

As you can see, there are plenty of knots in this wood. If we weren’t going to paint it, we probably would have sprung for something higher quality with less imperfections. Some of the boards were just a little warped, so we really had to hammer them down to get them straight on the others, but for the most part it was pretty simple. 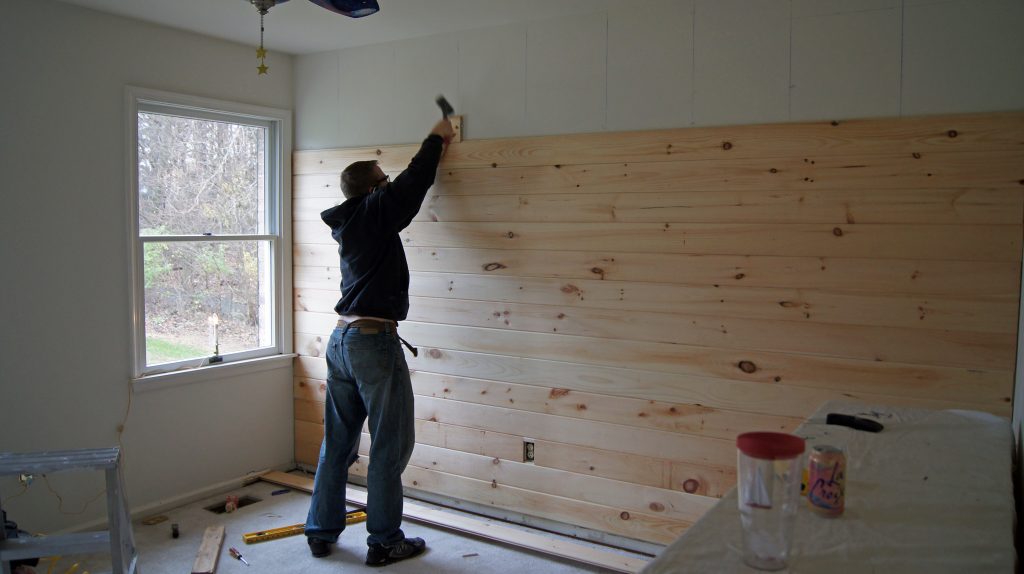 Hammering the board down

Once it was all up, it was time to paint again. I deferred to Carolyn on that again. The paint color was sooooooo much darker than we normally paint, but it looked great. We used all no VOC paint for the nursery, but Carolyn was super pregnant at the time so she still wore a mask and we cracked the windows. 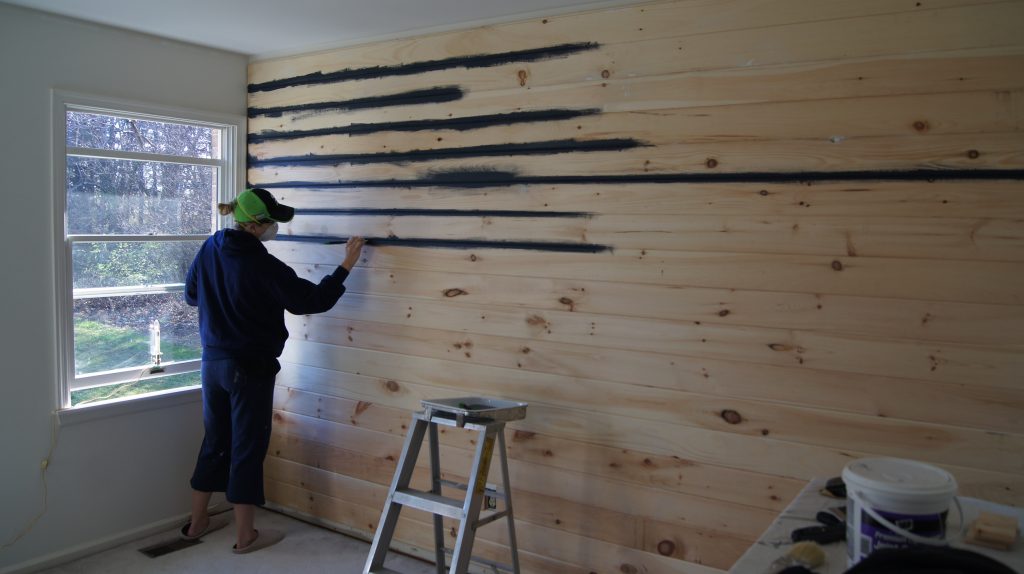 Painting in all of the crevices 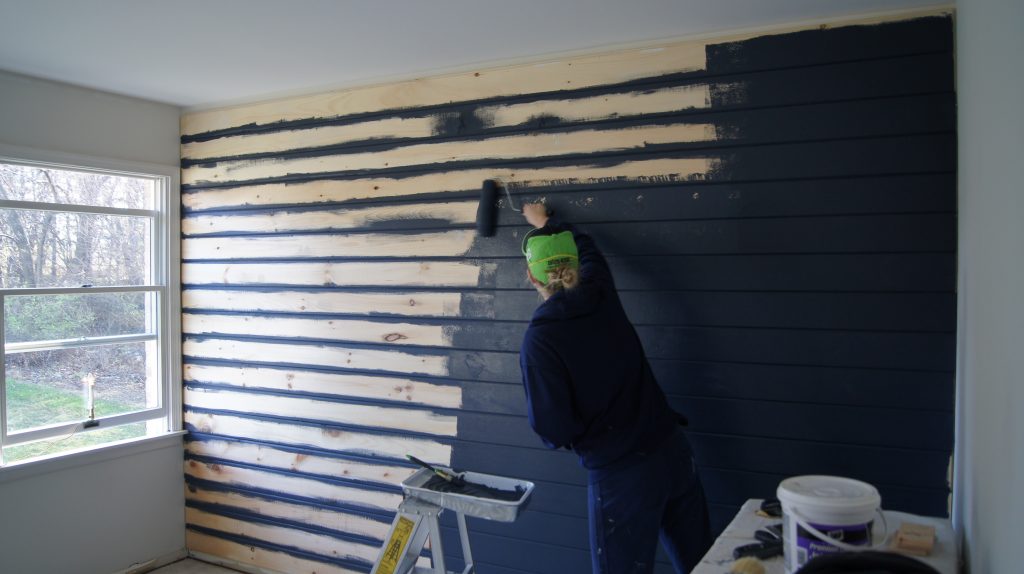 After it was all painted, she still had to go in with a small brush to touch up some of the spots in the crevices that wood was still visible. Since wood expands and contracts, sometimes you can still see small wood patches if you look at the right angle. If we use this method again, we may paint the boards with a coat before installing them to prevent that.

Once again, there was a lot more to this room, some of which Carolyn has talked about here, here, and here. But this post is about shiplap and plank walls, so I’ll just cut to the finished product. 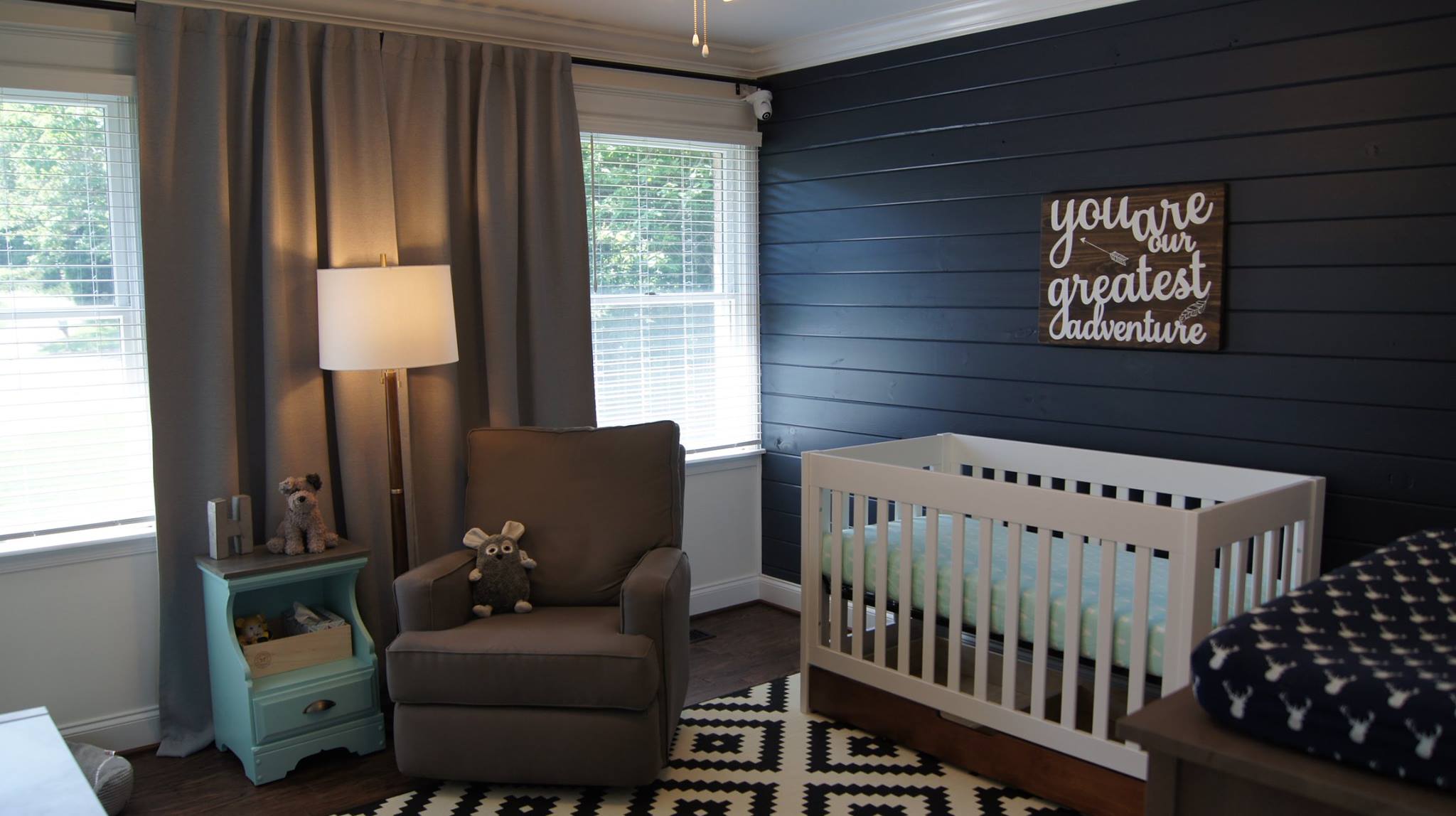 So now that we have two of these projects under our belt, I’m pretty sure that makes us experts. And as an expert, I’ve decided to sum up our pros and cons for each method.

What do you think? Do you love the shiplap like us? We really love the look of it, and how it gives the room so much character. Have I convinced you to make your own plank wall? Let us know in the comments!

Very informative and detailed. Both look great think I’m leaning to plywood since I now know they will cut strips at store for an accent wall.

Thanks for the comment, Jody. We’re glad you enjoyed the post and found it helpful! Depending on who you get at the hardware store, they might not be too happy about doing the strips, but they should do it nonetheless. Good luck with the project, and please let us know how it goes!

I am just wondering, which do you like better? I am about to do a ship or nickel on my kitchen ceiling between beams. (Actually my builder is, and I am trying to keep costs down, and the “look” high 🙂
Thanks,
Gretchen

Hi Gretchen, good question! We like the tongue and groove better overall, despite the extra cost, but the nickel gap definitely has its place in a low-budget renovation. We thought it looked great, too, but was a little more difficult to install. In your case, I would not recommend doing nickel gap, at least with the 5mm plywood, because it is VERY flexible and would be difficult to install on a ceiling. The installer would need to nail very frequently to prevent flexing and warping of the boards. Also, it would be incredibly difficult to use the nickel spacers on… Read more »

Hi guys, was wondering what kind of brush you used to fill in the gaps on the tongue and groove? We just put ours up, and I was all pumped to start painting. Then oh my goodness came the drips in the cracks. Tried several things and not really much luck. I was thinking maybe a artist size paint brush? Thanks for the feedback.

Hi Laura! I used a regular angled brush to paint them at first, and then rolled over top of that to combat any drips. When it got to the colder months, the wood contracted a bit and showed a lot of the wood again, so then I just used a super tiny paint brush to get in there. Hope it helps!

What did you do in the bathroom around the vanity? Did you cut the plywood to fit around it or did you pull the vanity off the wall, install the plywood and then put the vanity back?

We got a new vanity when we did this so we just did the whole wall and then installed the vanity over top!

You could certainly just cut it to go to the edges of the vanity if you don’t have a reason to remove the vanity. There’s nothing wrong with doing it that way. A little caulk will get the seem looking nice.

Just think for the future if you have any plans to change out the vanity. If you do, you may want to do the plywood behind so you can replace it without having to re-do a section of the nickel-gap.

What color is the powder room?

It’s actually just the zinsser white primer. I was priming the wood before the topcoat, and liked the look of the primer so much in there that I just did 2 layers of primer 😊